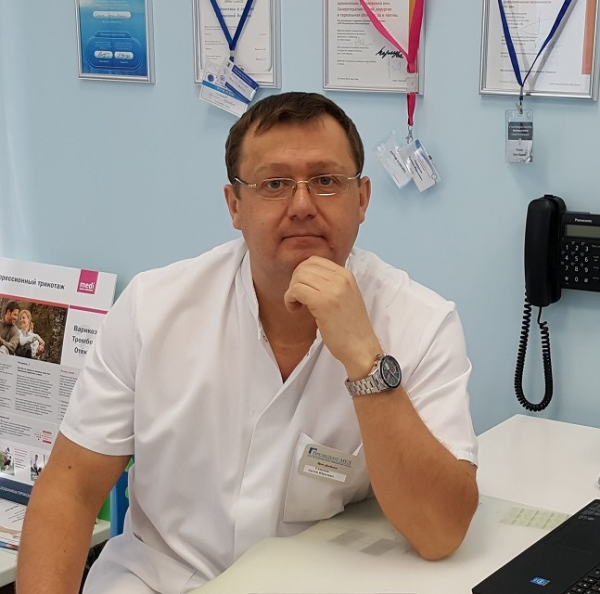 Head of the Innovation Center for Phlebology "MIFTS" Speeches by Dr. Semenov A.Yu. at conferences and workshops

The treatment methods used by Dr. A. Semenov Semenov A.Yu. with a phlebologist from Austria Alexander Flor at a conference in Moscow

Author and co-author of a large number of printed works and reports on phlebology. Participant of Russian and international scientific conferences, seminars and master classes on venous pathology, congresses held under the auspices of "Association of phlebologists of Russia".

Reviews of patients about the phlebologist Semenov Artyom Yuryevich

Patient's review of treatment at our center by the surgeon-phlebologist Semenov A.Yu. I am a Muscovite. For over 15 years she suffered from varicose veins. In March 2017, God granted me the opportunity to contact MIFC with advanced varicose veins of both legs.

The head of "MIFC" endovascular surgeon - phlebologist Semenov Artyom Yuryevich, candidate of medical sciences accepted me, saying that you can’t pull more, you must urgently act, because the level of the disease was already critical.

I completely trusted God and an experienced doctor, especially since in connection with endoprosthetics of the left hip joint the treatment of varicose veins with the traditional method did not suit me. A more gentle laser treatment was required. The most interesting thing about this treatment was that after the operations it was necessary not to lie down, but to walk along the street for some time. After the walk, the examination again and returning home for rehabilitation. During treatment, a routine examination and correction of the state of the veins was carried out. The results are encouraging. Before, I couldn’t walk, stand, sit because of the heaviness in my legs. Legs swelled, there were problems with shoes. Now I calmly stand up for service in the Orthodox Church, become mobile, lead an active lifestyle.

Thanks to God and the doctor, the glorious surgeon-phlebologist Semenov Artyom Yuryevich. Good luck and health to you, doctor. God bless you.

Feedback from our patient about the treatment at the surgeon-phlebologist Semenov A.Yu. THANKS TO THE LETTER. Dear Artem Yuryevich! Exactly a year ago, you helped me stop the development of the disease of my legs, which has been going on for about 20 years. I regained ease in movement, beauty and harmony. I am very glad that at that time I made the decision to contact you, your center. Thank you for your attention, kindness, sensitive attitude. I wish you good health, long and fruitful medical work. And I want to give you a medal, or rather the order as the best doctor with a capital letter! WITH RESPECT AND THANKS GOVOROV ELENA, G. MALOYAROSLAVETS. 25.05.2017 YEAR.