September 8, 2017 in the "Clinic of high medical technologies named after N.I. Pirogov "St. Petersburg State University held a symposium and master class with international participation, which was called:" Innovative technologies in the treatment of varicose veins. "

The event was organized by the "Clinic of high medical technologies named after N.I. Pirogov "in the person of the director of the clinic, Doctor of Medical Sciences Yuri Nikolaevich Fedotov and the head of the Center for Outpatient Surgery, Sergei Nikolaevich Derkachev. 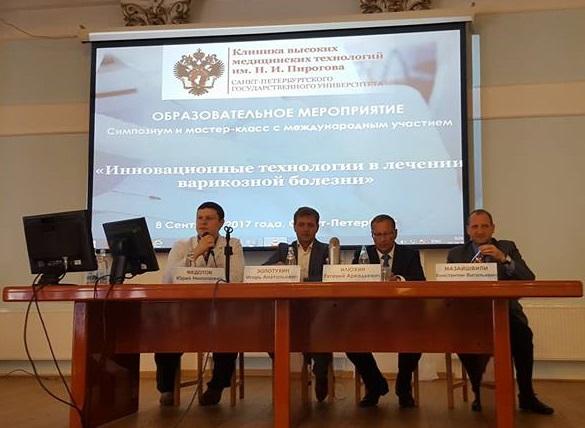 Presidium of the International Phlebological Symposium in St. Petersburg

The head of the phlebology center "MIFC" Semenov Artem Yurievich took part in the symposium. 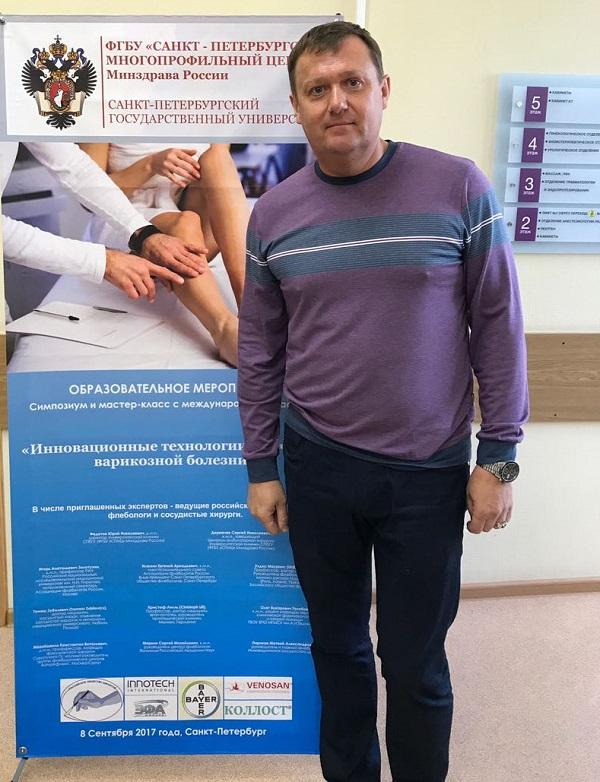 Dr. Semenov A.Yu. before the symposium in St. Petersburg

After the welcome speech of the Director of the clinic Fedotov Yu.N. doctors from Europe demonstrated two demonstration operations on the veins of the lower extremities.

Phlebologist from the Baltic States Uldis Maurins (Uldis Maurins) masterfully conducted endovenous laser obliteration in a patient with varicose veins. Then he answered questions from the audience. 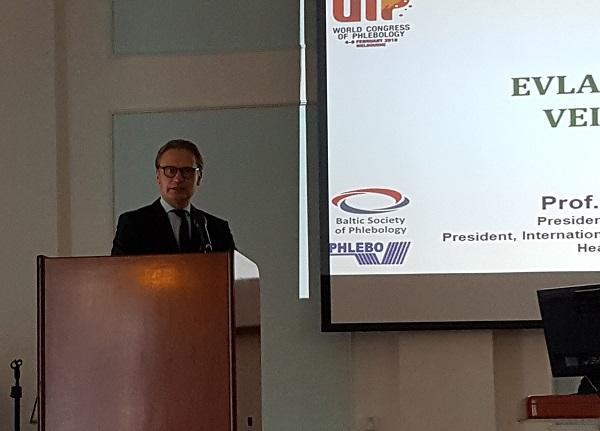 Further, the doctor from Poland Tomasz Zubilevicz demonstrated the newest technique of mechanosclerobliteration, which was called "Flebogriff". The essence of this technique lies in the simultaneous rotational mechanical and chemical damage to the vein wall, which subsequently leads to its complete obliteration. The doctor has already performed more than 1000 Flebogriff mechanosclerobliteration procedures with very good immediate results. However, how the technique will show itself in the long term is not yet known. 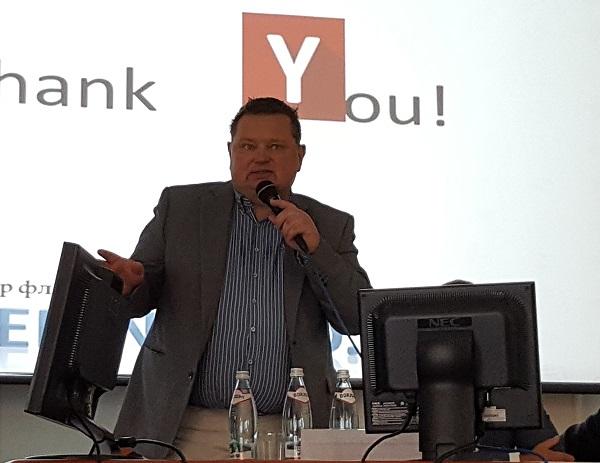 The next master class was demonstrated by Sergey Nikolaevich Derkachev, head of the outpatient surgery center of the St. Petersburg State University clinic. He showed an interesting way to close a huge trophic ulcer of venous etiology using the biological drug "Collost". This method of healing long-term trophic ulcers is quite successfully used by surgeons phlebologists of the center of outpatient surgery from St. Petersburg, showing excellent results. 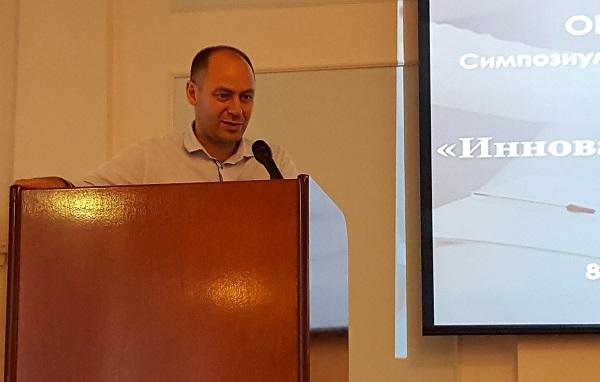 After the master class of S.N. Derkachev made a report on the method of healing trophic ulcers using the biological preparation "Collost".

Then there was a lively discussion of phlebologist surgeons. Questions of indications and contraindications, complications and nuances of the technique of carrying out all these interventions were discussed.

In the second part of the symposium, Yevgeny Arkadevich Ilyukhin from St. Petersburg made a brilliant report on therapeutic tactics in thrombosis of superficial and deep veins. The doctor dwelled in detail on the use of PLA in deep thromboses; indications and contraindications to prolonged anticoagulant therapy (AT), in assessing the risk of relapse or progression of VTEO; on how to assess the risk of hemorrhagic complications during AT; on the evaluation of drugs that are used today in the treatment of thrombosis. 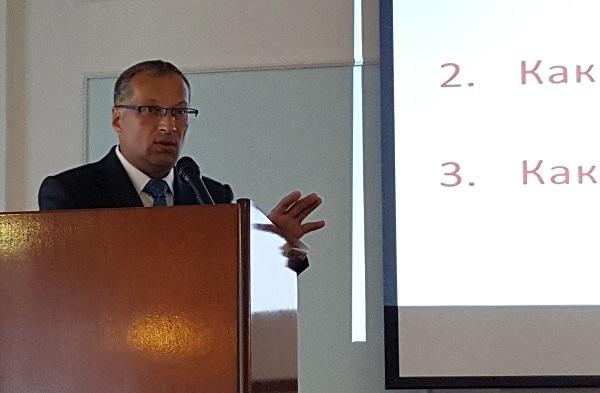 An important point in the report of Yevgeny Arkadievich was the algorithm of performing AT in patients with thrombosis during pregnancy and after childbirth.

Excellent reports "Shine and poverty of modern phlebology" and "Basics of choosing a venotonic from the standpoint of clinical pharmacology. The results of a national study of the use of the drug Flebodia 600 in patients with CVD C0-C3 according to CEAP ”were made by K.V. Mazayshvili and O.B. Talibov. 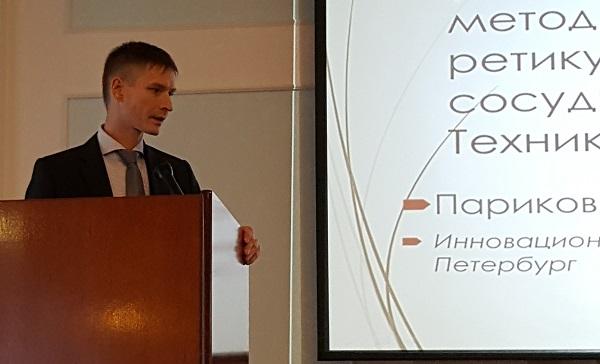 In conclusion, a doctor from St. Petersburg, Parvey Matvey Alexandrovich reported on his personal experience with the use of Cryo Laser Cryo Sclerotherapy (CLaCS). CLaCS is an innovative method for the treatment of reticular veins and vascular asterisks, in which the technologies of transcutaneous (transcutaneous) laser, sclerotherapy and cryotherapy are combined, which gives an excellent cosmetic result. However, he added that today there are certain points on which this technique can not be conducted in Russia. Therefore, Matvey Alexandrovich slightly modified it and adapted it to our Russian realities.

Then he spoke in detail about the founder of the CLaCS technique - the Brazilian phlebologist Kasyo Miyake (Sao Paulo) and the method itself, which made a splash in aesthetic phlebology. In his report, Doctor Parikov M.A. compared two methods: CLaCS and isolated sclerotherapy, and concluded that with CLaCS, the results of treatment of reticular veins and spider veins are significantly better. But further improvement and search for optimal modes and settings of laser generators are required. 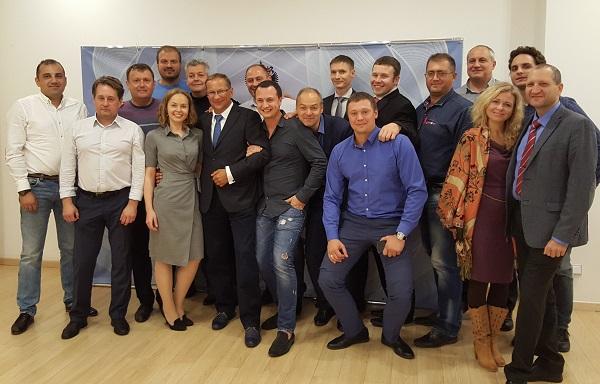 Participants of the phlebological forum in St. Petersburg - leading phlebologists of Russia

I would like to express my deep gratitude to the organizers of the symposium - this was their first experience in holding such events, but everything went at a high organizational level. Reports, demonstrations of treated patients, on-line demonstration of innovative methods of treating varicose veins from the operating room, and most importantly live communication with colleagues and friends phlebologists from different cities of Russia - all this will remain in our memory. We hope to return to this clinic in the glorious city of St. Petersburg next year.