Interview with the newspaper “AIF” of the phlebologist “MIFTS”, Ph.D. Fedorova D.A. “Varicose veins are not only ugly, but also dangerous”

The latest issue of Argumenty i Fakty is No. 45 2018. An interview was published by the leading phlebologist of the Phlebology Center "MIFTS", Ph.D. Fedorov Dmitry Anatolyevich about new methods of treatment of varicose veins and the latest laser technologies that are used in our center. 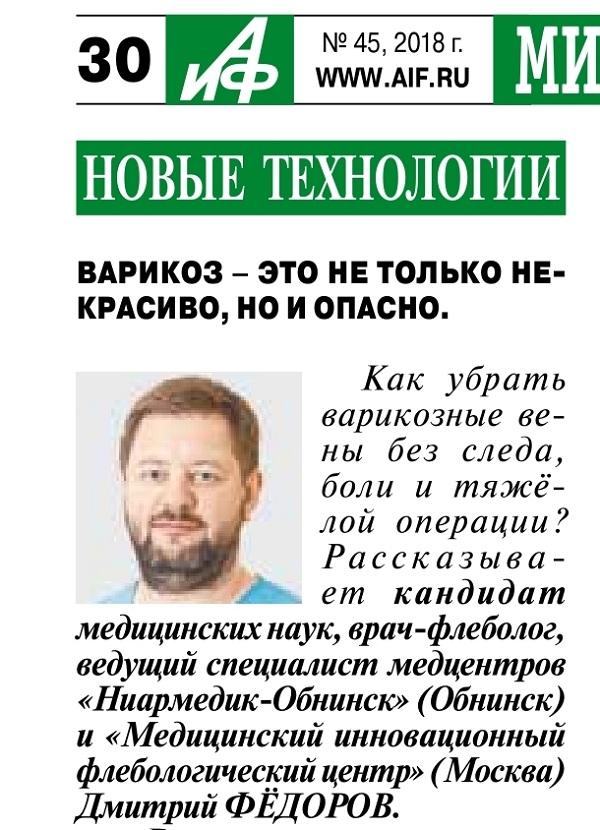 How to remove varicose veins without a trace, pain and difficult surgery? This is the story of Dmitry Fedorov, Candidate of Medical Sciences, Phlebologist, Leading Specialist of Nearmedik-Obninsk (Obninsk) and Medical Innovative Phlebological Center (Moscow).

- According to statistics, every third woman and every tenth man on the planet suffers from varicose veins.

It is bad if the patient comes for emergency indications - with thrombosis (and 90% of thrombosis occurs precisely in the varicose nodes) and thrombophlebitis (clogging and inflammation of the veins). In such cases, treatment often turns into emergency surgery. In addition, urgent medical care may be needed in a place where there are no specialists who know modern methods of treatment. Sometimes it becomes necessary to remove or ligate a vein so that the thrombus does not go further and does not cause thromboembolism (the most formidable and, alas, a frequent complication of thrombosis). In other cases, the problem can be solved with little blood. More precisely, without her.

With varicose veins, the vein expands, the valves stretch and cease to cope with their main task - to facilitate the outflow of blood. The blood begins to stagnate, the legs begin to swell, and blue venous clusters appear on them - the main sign of varicose veins.

It is impossible to repair a damaged vein. There is only one way to save a person from varicose veins - by “turning off” the varicose vein from the bloodstream and thereby reducing the load from healthy veins. The Jesuit days, when damaged veins were pulled out (this operation was called radical phlebectomy), are long gone. Today, this operation is used in the rarest cases and only in the treatment of patients who are contraindicated in other ways. In the treatment of the rest, sparing techniques are used, which allow a pointwise effect on the damaged vein without injuring the surrounding tissues - sclerotherapy (gluing the veins from the inside with a special compound), radio frequency exposure or laser coagulation (in which the main vessels are "welded"). Lasers were first used in medicine in the 1960s. Then the surgeons mastered the laser scalpel. Later it turned out that lasers can cope with almost any task, acting pointwise on the desired target, so they were used in all areas of medicine. With their help, ophthalmologists began to perform filigree operations on the retina of the eye, urologists to crush stones in the ureter, and cosmetologists to tighten the skin of the face without incisions. Each procedure uses its own type of laser, with its own "profile" wavelength. In the arsenal of phlebologists, lasers appeared relatively recently - 15 years ago. Then a new procedure appeared: endovasal laser coagulation (vaporization of veins with a laser beam). This method is also called "office surgery", since the operation is performed under local anesthesia and lasts no more than 40 minutes, after which the patient leaves the clinic on his own and can return to work if he wishes. The advantages of this method were obvious from the very beginning, but doctors and physicists have constantly improved it, using different types of lasers. The first laser devices did not allow, for example, to work with superficial and perforating veins; after the veins were removed, they left pigment spots and scars that created discomfort when walking.

The first reports about the creation of a miracle laser - a fundamentally new device with a wavelength of 1940 nm - appeared in 2013. The publication of its successful application appeared in the scientific journal of phlebology on behalf of a team of doctors from the USA and Brazil. Three years later, this device appeared in Europe. The difficulty was that the doctors worked on experimental samples - devices made to order in a single copy, so their price was comparable to the price of an airplane. Then our doctors turned to the center of laser technologies near Moscow (Fryazino) for help, which produces 50% of all lasers in the world. And then it turned out: our scientists had developed the same device two years earlier than it appeared overseas, and five years earlier than it was used in Europe. The certificate for use in medical practice was obtained five years ago. Physicists all these years could not reach doctors and convince them to use the new product! If the overseas "discovery" had not arrived in time, the new laser would still be unclaimed on the factory shelves. The very first application confirmed the unique properties of the new laser. It turned out that it has a fundamentally new effect. When used, a steam-gas jet is formed with less energy (this means less injury to the surrounding tissues) and a lower temperature. This makes it possible to warm the vein more evenly. Due to this, a soft, quickly absorbable scar is formed at the site of the diseased vein, which does not cause discomfort and does not leave any retraction or pigmentation on the skin. In fact, the vein simply disappears without a trace. Six months later, traces of it cannot be found even with an ultrasound examination. After the procedure, the patient needs to wear compression hosiery for 1–1,5 weeks (the inability to use it for the period of treatment is considered an absolute contraindication to surgery). 1–2 months after the removal of the great veins with the help of sclerotherapy, varicose nodes are removed (the tributaries of large veins, which, being left without feeding, are reduced during this time). And the patient forgets about varicose veins and its complications forever. 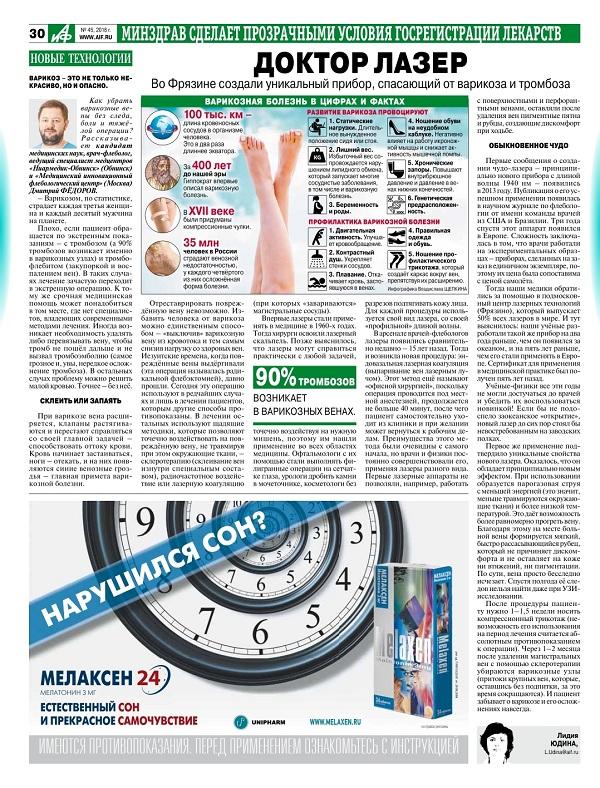 Lydia YUDINA, This e-mail address is protected from spam bots. You need JavaScript enabled to view.