On September 21, 2019, a phlebological conference "A patient with venous pathology at a surgical appointment: from varicose veins to post-thrombotic syndrome" was held at the Kremlin in Izmailovo Business Center. 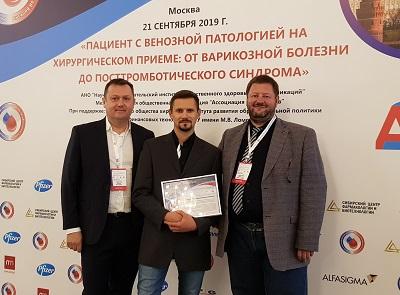 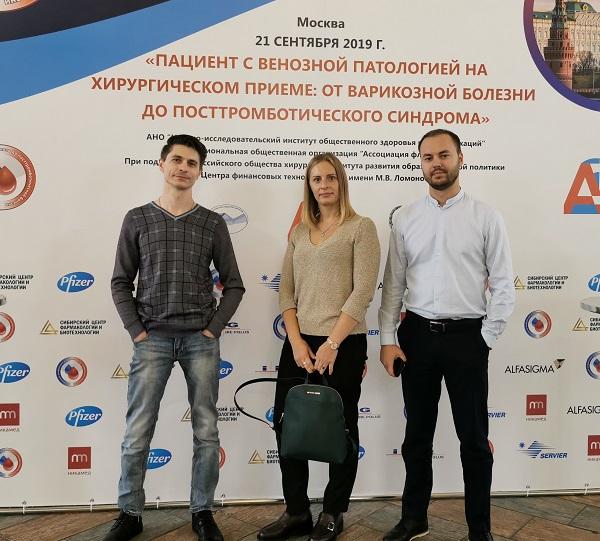 The president of the conference, Khachatur Mikhailovich Kurginyan, made an opening speech. He spoke about further plans for promoting the conference in the cities of the Russian Federation. 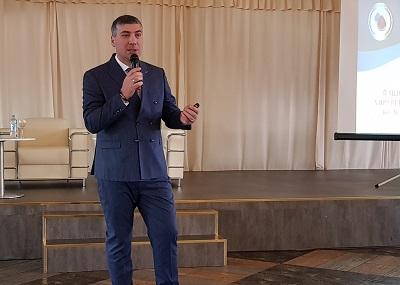 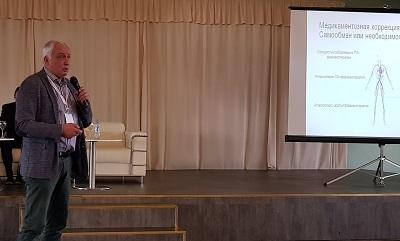 He spoke about the undeniable evidence of the effectiveness of the micronized purified bioflavonoid fraction in the treatment of chronic venous insufficiency. 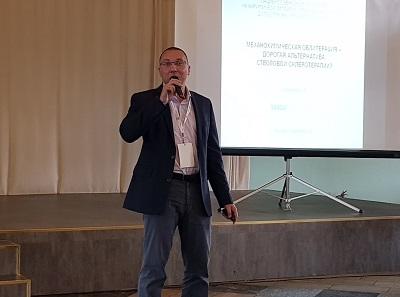 Sergey Vladimirovich shared his own experience of using the Flebogrif mechanochemical obliteration technique. Largely anticipated report in light of the active promotion of non-tumescent technologies. Despite the rather limited number of patients, it is difficult to talk about the bias of Dr. Maksimov. Indeed, even according to these data, it is quite possible to judge the immediate prospects of the technology, at least in Russia. It should be noted that Sergey Vladimirovich is an experienced endovascular surgeon, a recognized expert in modern techniques used in phlebology. The data obtained by Dr. Maksimov indicate a high percentage of recanalization of target veins, which required both more careful observation and additional manipulations. Including, endovenous laser obliteration of the recanalized varicose vein trunk. The economic benefits of using the technology, both for the patient and the doctor, are rather dubious. But reputational risks can be great, it is impossible to give a 100% guarantee on the result of treatment. Either laser obliteration is so good, or non-tumescent techniques are not yet so perfect, it is obvious that there is no need to talk about any direct competition between them today. When can we consider mechanochemistry as a method of treating varicose veins?

Evgeny Arkadievich Ilyukhin, Ph.D., head of phlebology REACLINIC, member of the Association of Phlebologists of Russia, member of EVF, (St. Petersburg) presented two reports. In the first of them, Evgeny Arkadyevich turned to the topic: "Compression knitwear - do we really need it?" 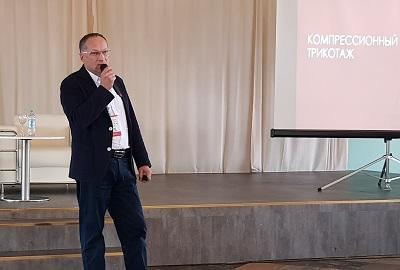 Compression therapy today is an integral part of modern treatment, practically, of any pathology of the venous or lymphatic systems of the body. The necessity and expediency of using which is beyond doubt. At the same time, only the competent application of compression therapy will have the necessary therapeutic effect. Dr. Ilyukhin devoted the next post to the evolution and limitations of endovenous laser obliteration. The technology of endovenous laser obliteration has passed a rather serious and difficult path for 20 years of its existence. Not all clinical and basic research has been perfect. In many respects, the changes took place and were maintained thanks to large-scale clinical practice, when the obviousness of the advantages of new wavelengths, fiber generations, operating modes did not need special advertising. Has EVLK with a wavelength of 1,5 micrometers and a radial light guide reached its perfection, is it necessary to go further or develop alternative directions for the treatment of varicose veins?

Artyom Yurievich Semyonov, Ph.D. Head of the Moscow Innovative Phlebological Center, (Moscow), in the message: “Endovascular methods of treating varicose veins. Is there a way further? " continued the theme of Evgeny Arkadievich. 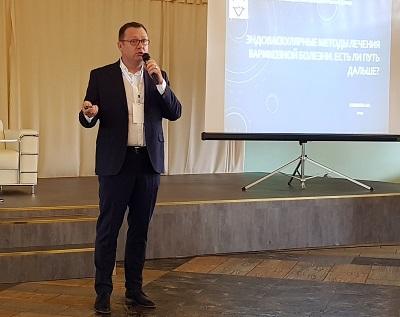 It is indisputable that laser technologies, practically, at the very beginning of their journey, made it possible to effectively coagulate a vein. Thermal ablation modes, the specifics of laser fibers operation, a number of already forgotten, but existing complications are a thing of the past with the modernization of technology. Now it is difficult to imagine how to work with an end-face fiber on a laser with a wavelength of 810 nm. Yes, with the right approach, the vein will be obliterated. But the energy regime, which we will use in this case, will bring a number of not the most pleasant nostalgic sensations. This is what evolution is for. So do we need a new wavelength, and why? In modern practice, there are already a number of specialists working in parallel on lasers of 1470 and 1940 Nm. Yes, the 1470nm laser wave is familiar, comfortable and effective for removing varicose veins. At the same time, the 1940 Nm laser equipment offers a softer, and at the same time no less effective mode of operation, which gives additional opportunities. As an example, laser removal of suprafascial vein tributaries is associated with much fewer side effects. The new wavelength is definitely better than the familiar 1470 Nm. Considering that technologies that are trying to compete, in the form of non-tumescent techniques, show themselves to be a rather weak alternative, the "dead-end branch" of phlebology development in the face of laser obliteration will dominate in the coming years, at least.

Dmitry Anatolyevich Fedorov, Ph.D. Leading phlebologist of the Moscow Innovation Phlebological Center, (Moscow), in his report revealed the physics of the process of venous coagulation. 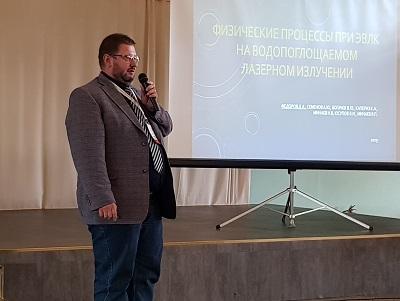 A study was presented to the public demonstrating how laser radiation affects the aquatic environment. There are not so many works of this kind in domestic and world practice, therefore this study deserves special attention. Dmitry Anatolyevich clearly demonstrated what processes occur in a vein during laser exposure. In the report of Dr. Fedorov, it was shown that an effective effect on the vein wall can be provided by a one and a half and two micron laser, using an end and radial light guide. Also, the study demonstrated how much more targeted and selective a two-micron laser with a radial fiber operates, due to which the energy regime is reduced without loss of efficiency.

Alexander Flor, professor, vascular surgeon specializing in the treatment of venous pathology of the upper and lower extremities, member of the American College of Phlebology, (Vienna, Austria), presented the message: "Sclerotherapy of the veins of the hand". 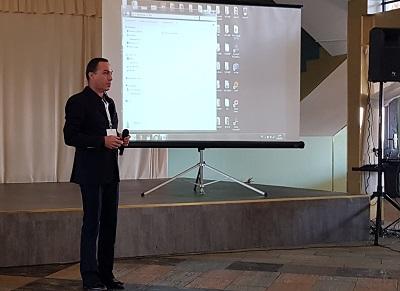 Dr. Flor spoke about the aesthetic correction of veins in the hands of the following groups of patients (the overwhelming majority of women seeking help):

Alexander Flor spoke about vein removal tactics on virtually all anatomical segments of the upper extremities: on the hands, arms, and shoulders. A doctor from Switzerland uses all modern technologies to remove veins in his hands:

The vast majority of interventions are foam sclerotherapy (about 80% of procedures). Dr. Flor spoke in detail about the nuances of his own procedures, the management of patients after interventions. 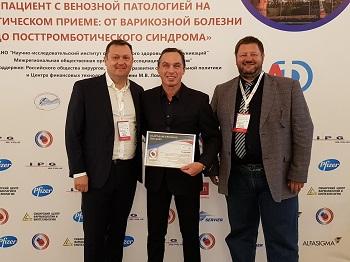 Joint photo for memory of Alexander Flor with phlebologists "MIFC" 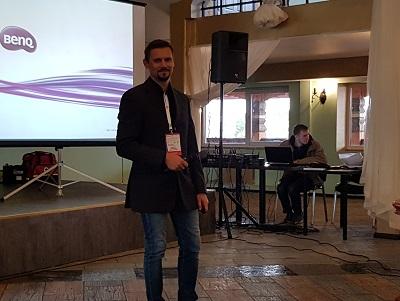 a - tactical errors - problems in assessing the initial pathology,

b - technical errors associated with the difficulties of performing the planned treatment,

The factors listed in the first paragraph, we can influence by:

With paragraph No. 2, everything is somewhat more complicated. To date, there is no scientific data that clearly describes the mechanisms of progression of varicose veins. Clinical observations suggest a certain list of factors that accelerate the process of progression. Namely:

Vladimir Vyacheslavovich drew public attention to the most common variant of the development of recurrence of varicose veins when removing a large saphenous vein, varicose enlargement of the anterior lateral inflow of a large saphenous vein. With a pathological extension of this vein. up to a year after the innovative treatment, the vast majority of practicing specialists came across. The appearance of varicose expansion in the basin of the anterolateral inflow is often impossible to predict. How can we control relapse in a given vein pool as much as possible:

Denis Aleksandrovich Borsuk, Ph.D., Chairman of the NKF Control Commission, Head of the Clinic of Phlebology and Laser Surgery, (Chelyabinsk-Yekaterinburg), presented the message: "Isolated EVLO - a necessity or an inevitability?" 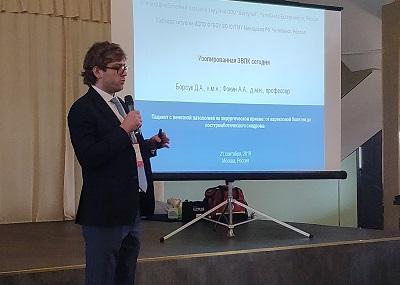 Denis Aleksandrovich shared the results of a study of his own clinic on the efficiency and safety of performing endovenous laser obliteration without removing inflows. In the results: 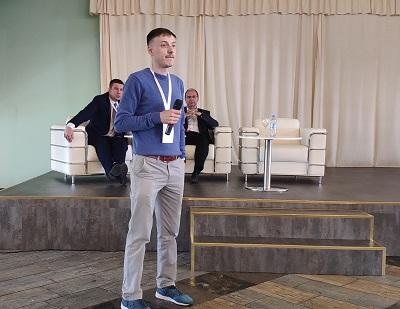 Roman Alexandrovich presented the results of a one-center prospective study that studied the patterns of the spread of reflux in varicose veins. 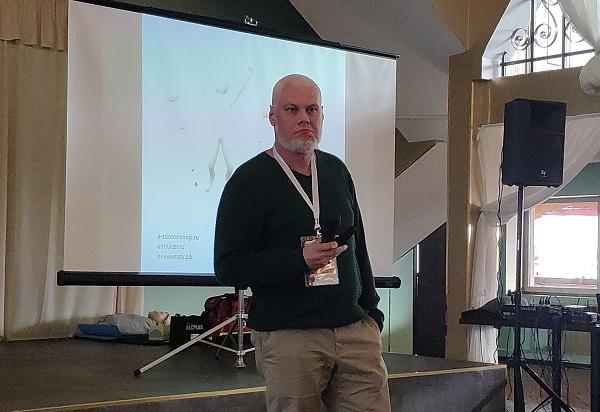 Sergei Nikolaevich revealed the economic aspects of the treatment of chronic venous ulcers in the modern practice of domestic medicine. 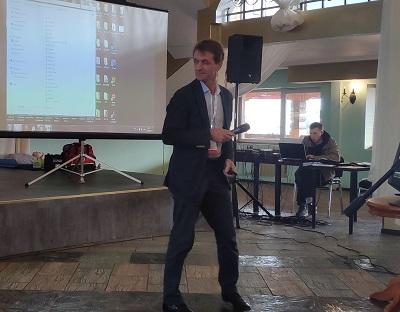 Yashkin Maxim Nikolaevich, Ph.D., surgeon, phlebologist, FGBU NMHTs named after N.I. Pirogova, (Moscow), presented the message: “Stenting of the iliac veins. What do the results look like? " Dr. Yashkin shared the data of the world's leading specialists in the field of venous stenting and observations from his own practice. 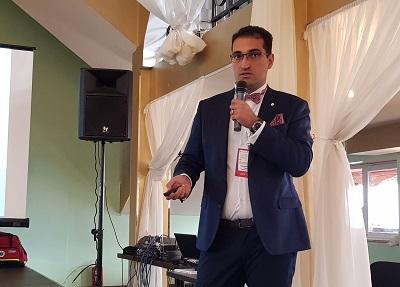 Hovsep Petrosovich shared the current state of the art on the approach to the treatment of acute thrombophlebitis. Radical innovative treatment of varicose veins complicated by thrombophlebitis in the acute and subacute period today has a significant number of supporters. It is important that this approach in modern practice is based on a good practical basis for treating patients.

Polina Georgievna Gabai, General Director of the Faculty of Medical Law, Legal Counsel for Medical Law, (Moscow), gave a lecture: "Legal aspects of the work of a phlebologist." 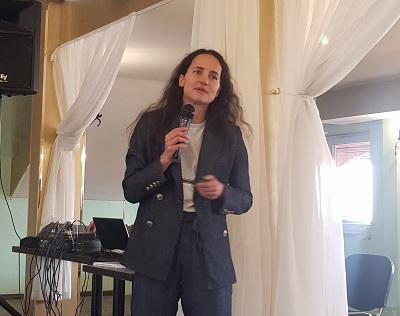 Polina Georgievna shared the most relevant information about the legal aspects of the work of a modern specialist in the field of phlebology.

Daniil Olegovich Starostin, instructor of the National Council for resuscitation, head of the department of anesthesiology and resuscitation (Moscow), presented: “Master class on cardiopulmonary resuscitation”. 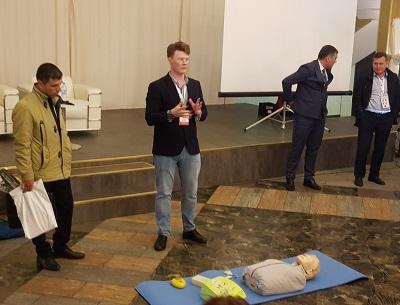 In the message, Daniil Olegovich shared the basic principles of emergency assistance in various conditions.

Photo of conscience for the memory of the participants and speakers of the conference "A patient with venous pathology at a surgical appointment: from varicose veins to post-thrombotic syndrome" in Moscow