Annual congress of the Association of Phlebologists of Russia: "Topical issues of phlebology", Yaroslavl, May 27-29, 2021

At the end of May 2021 in Yaroslavl, under the auspices of the "Association of Phlebologists of Russia", one of the leading events in the world and Russian phlebology, the scientific and practical conference "Topical Issues of Phlebology", took place.

Leading phlebologists of the Innovative Phlebological Center attended such a significant event. They presented interesting reports on burning phlebological topics. Dmitry Anatolyevich Fedorov made a report: "EVLK: yesterday, today, tomorrow !!!", in which he spoke about the prospects for the development of laser phlebology in Russia. Vladimir Vyacheslavovich Raskin reported on the possibilities of endovascular methods of treating varicose veins after superficial vein thrombosis. 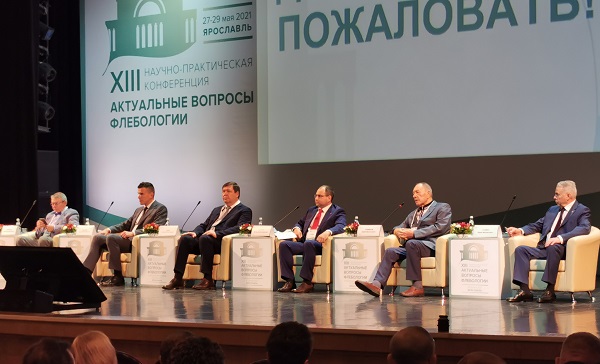 Presidium of the AFR conference in Yaroslavl 2021 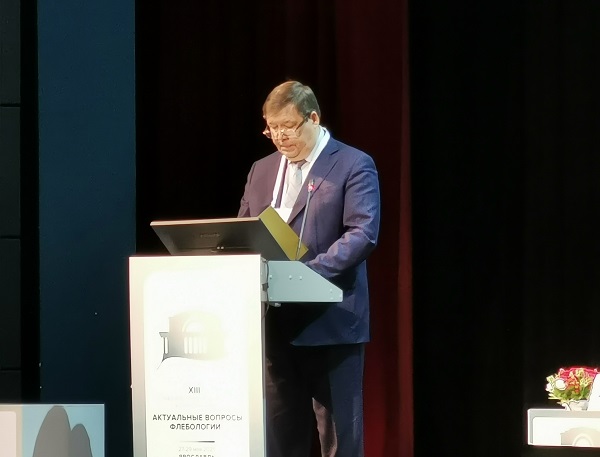 Welcoming speech of the Deputy Chairman of the Government of the Yaroslavl Region Gulin A.N.

The conference was opened by Igor Aleksandrovich Suchkov, cardiovascular surgeon, professor, president of the Association of Phlebologists of Russia. 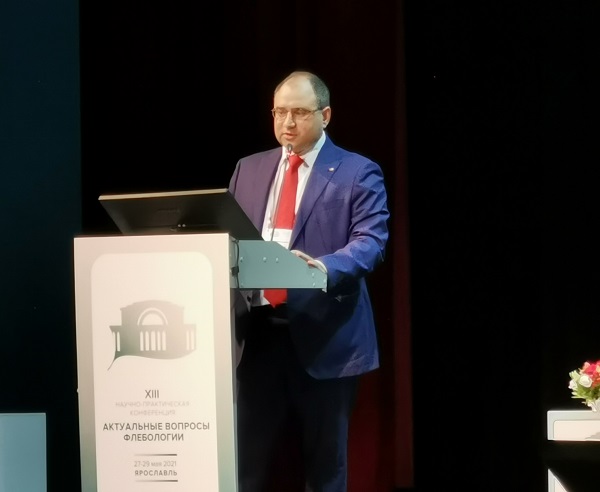 The President of the AFR, Suchkov I.A. (Ryazan)

Igor Aleksandrovich also presented the message: "Surgical treatment of chronic venous thrombosis-1", in which he voiced modern approaches to the treatment of varicose veins.

Igor Nikolaevich Ignatovich, vascular surgeon, doctor of medical sciences, professor, Belarusian State Medical University, (Minsk, Belarus), presented the message: "Comparison of the results of preservation or obliteration of the great saphenous vein in the treatment of varicose veins of the lower extremities."

Igor Nikolaevich presented a study of the effectiveness of the ASVAL technique in patients with an average diameter of the great saphenous vein not exceeding 6 mm. As it seems, for a more fair assessment of the results of the study, it was necessary to use varicose veins of equal diameter in comparison of approaches. That is, to use ASVAL and EVLK with miniflebectomy in patients with similar parameters of the venous vessels. 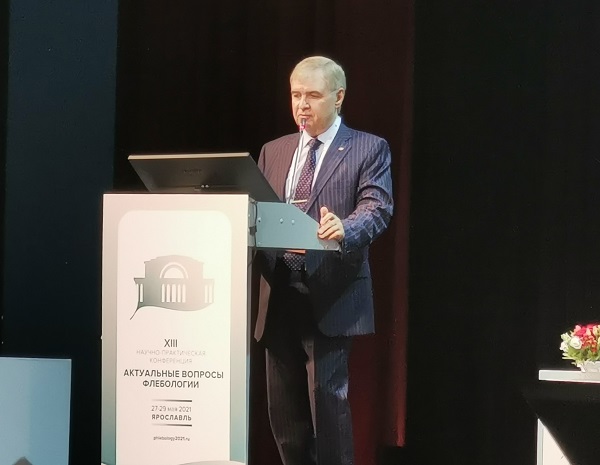 Sergey Mikhailovich shared his positive experience of using glue obliteration in his own clinical practice. The next message of Dr. Belentsov: "Ways to improve aesthetic results in modern phlebology", was devoted to the fight against telangiectasis. Sergei Mikhailovich proposed optical magnification for microlerotherapy and its combination with percutaneous laser coagulation to optimize their removal.

Ivan Nikolaevich Shanaev, Candidate of Medical Sciences, (Ryazan), presented the message: "On the question of the effectiveness of ligation of perforating veins using open surgical techniques." Roman Evgenievich, on the basis of the sectional material, demonstrated the complexity of the anatomical and topographic relationships in the field of perforating veins in the context of the application of various surgical techniques for treating varicose veins. 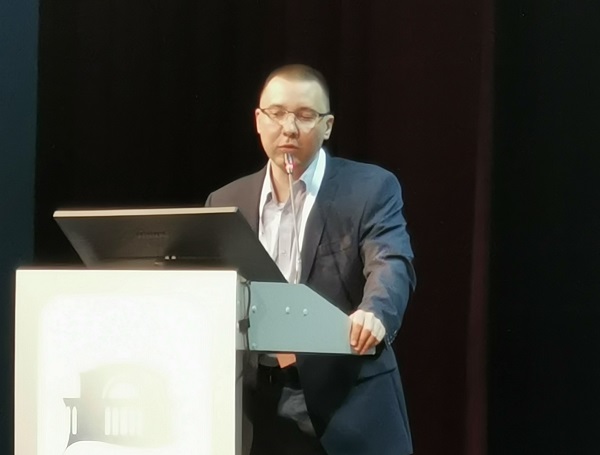 Sergey Vladimirovich demonstrated the experience of his phlebology center in removing perforating veins using adhesive obliteration. Arguing against the advantages and disadvantages of this technique, we can say: 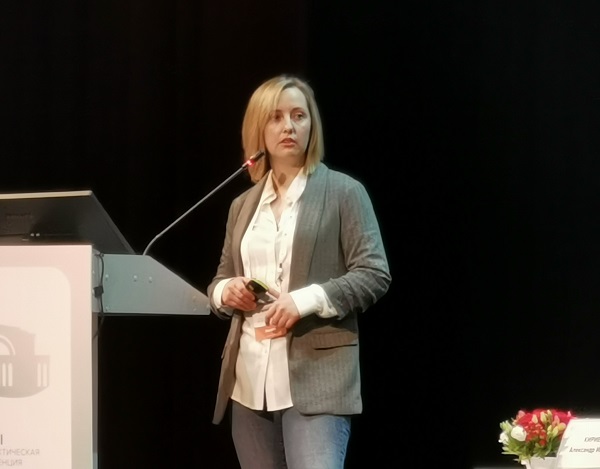 Dr. Poznyakova voiced a far from new idea of ​​isolated thermo-obliteration of the great veins in various forms of varicose veins. Saving time for miniflebectomy, with delayed sclerobliteration of varicose veins, is a fairly common solution in many phlebological centers. The advantages of such a tactical scheme are rather controversial.

Sania Nailevna Odinokova, cardiovascular surgeon, phlebologist, (Moscow), presented the message: "Cyanoacrylate adhesive obliteration of the veins of the lower extremities: the experience of one center." Dr. Odinokova shared the results of the phlebological center's work on the example of adhesive obliterations of 245 venous basins. Sania Nailevna reported successful obliteration in 98,7% of cases. Phlebitis-like reaction developed in 12,5% ​​of patients. Segmental recanalization of the target vein and granulomatous inflammatory response at the entry point were recorded in 2 patients (1,3%). Probably, this experiment can be considered successful for cyanoacrylate obliteration. 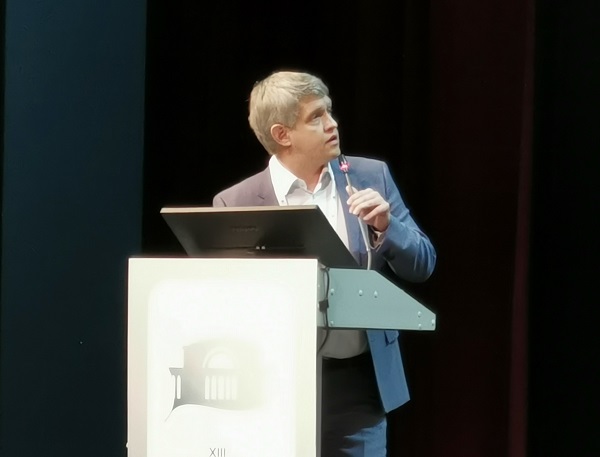 Sergei Nikolaevich shared the results of a clinical study in 43 patients (46 venous pools) of thermal obliteration using a 1940 nm diode laser. Dr. Kornievich stated the positive results of EVLO treatment, leaving doubts about the choice of the energy regimen. Indeed, 10 W, even for two-ring fibers, is obviously too much.

Rustem Ginyatullaevich Chabbarov, Candidate of Medical Sciences, (Saratov), ​​presented the message: "Application of the principle of" growing radicalism "in the treatment of patients with varicose veins of the lower extremities." Rustem Ginyatullaevich proposed staged treatment, the use of softer, but also less effective technologies (stem sclerobliteration) with small diameters of the main saphenous veins, as the first stage of treatment. Subsequently, in case of unsatisfactory results, use thermal obliteration. This approach can find its supporters, especially among a number of patients. But we all know the difficulties in conducting a laser light guide and, especially, a catheter for RFO, after previously performed vein sclerobliteration. And the concept “it may be helpful” does not work very often. 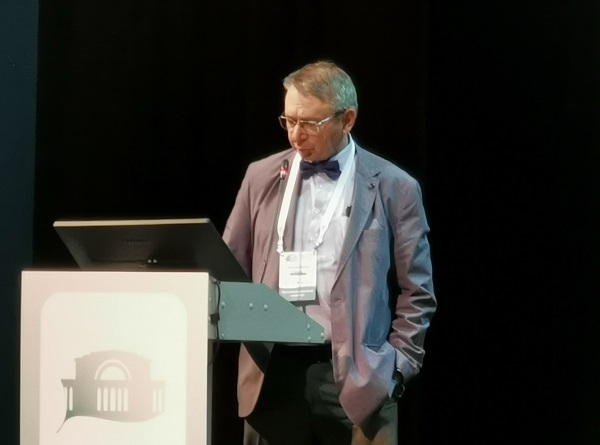 Report by Academician of RAS and RAS Kiriyenko A.V. (Moscow)

The problem of venous thromboembolic complications became especially acute after the onset of the Covid pandemic. This was noted by both surgeons at the reception in state polyclinics and phlebologists in private medical practice. Alexander Ivanovich presented world and domestic data on the increase in the number of VTEC in patients who have undergone Covid infection. Disappointing figures tell us that anticoagulant prophylaxis of venous thromboembolic complications is advisable and justified.

Igor Anatolyevich Zolotukhin, phlebologist, doctor of medical sciences, professor, (Moscow), presented the message: "VTEC: where are we now and where are we going?" 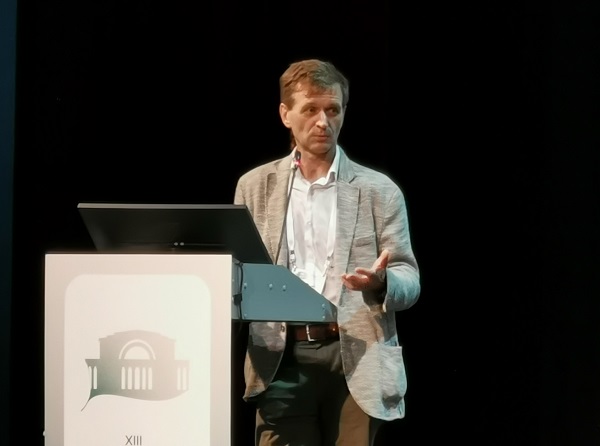 Igor Anatolyevich announced the current trends in the diagnosis and treatment of venous thromboembolic complications in domestic clinical practice.

Aleksandr Aleksandrovich Malinin, vascular surgeon, doctor of medical sciences, (Moscow), presented the message: "Surgical hemodynamic correction of blood flow due to unifocalization of collateral saphenous venous outflow." Aleksandr Aleksandrovich voiced the principles of hemodynamic correction in post-thrombotic syndrome by surgically changing the blood flow (unifocalizing it through the perforating veins into the saphenous vein system). The data provided on the results of this treatment indicate a significant positive clinical effect and an improvement in the quality of life of the operated patients.

Boris Abovich Maslyansky, phlebologist, angiosurgeon, (Gomel, Belarus), presented the message: "Cystic venous adventitia disease: a clinical case." Boris Abovich told about a rather rare and interesting clinical case of diagnosis and treatment of the femoral vein adventitia cyst. The patient was successfully operated on, regression of clinical symptoms was obtained. Despite the rarity of cystic venous adventitia disease, this case is not unique. Therefore, it is necessary to take into account this disease in the diagnostic search when unilateral edema of the limb appears.

Askhat Koishibaevich Sanbaev, vascular surgeon, phlebologist, (Saratov), ​​presented the message: "Results of histological examination of the vein of a patient with varicose veins of the lower extremities after cyanoacrylate obliteration." 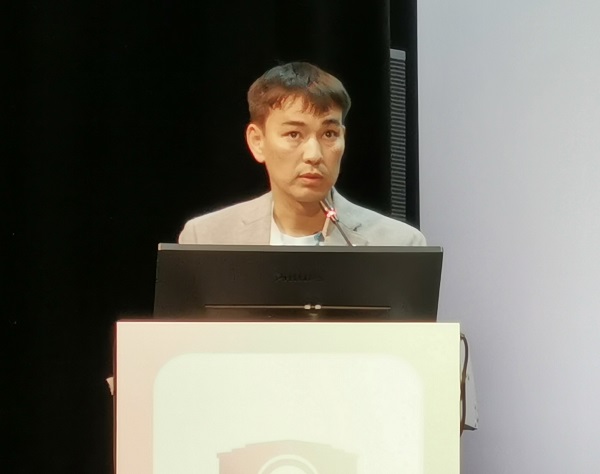 Adhesive obliteration of the great saphenous vein was performed in 2018. The collection of the vein section for morphological assessment was performed immediately after the operation, and subsequently: after 1,3,6,12 and 24 months. The histological examination of the sectional material allows us to shed some light on the question: what happens to the glue in the human body after cyanoacrylate obliteration. Once again, standing up, we applaud the dedication of Dr. Sanbaev, and look forward to the continuation of the study. 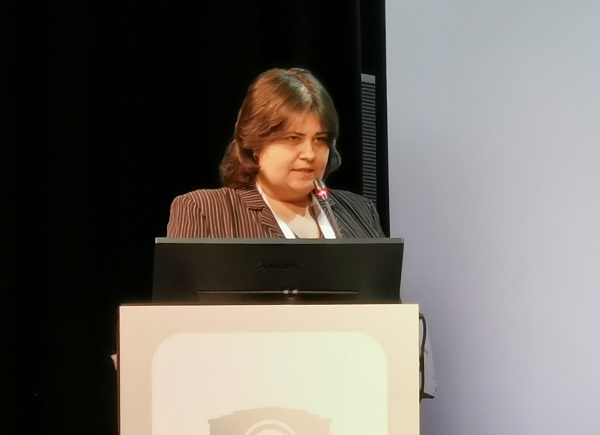 Ernest Anatolyevich Scheglov, Doctor of Medical Sciences, vascular surgeon, (Petrozavodsk), presented the message: "Simulator for practicing the skills of applying an elastic bandage." We all know the advantages of compression hosiery over elastic bandages. However, there are situations when bandages will be more relevant. For example, the presence of unstable limb edema. And not everyone has the skill of proper bandaging. Ernest Anatolyevich proposed a device: a simulator for teaching bandaging. This device is of significant theoretical and practical interest. Perhaps the clinical potential of the device will be realized in mass medical practice as well.

Yuri Mikhailovich Stoyko, Doctor of Medical Sciences, Professor, N.M. N.I. Pirogova, (Moscow), presented the message: "Features of the functional state of the endothelium in patients with C4 varicose veins according to CEAP after endovenous laser obliteration and pharmacotherapy with sulodexide." 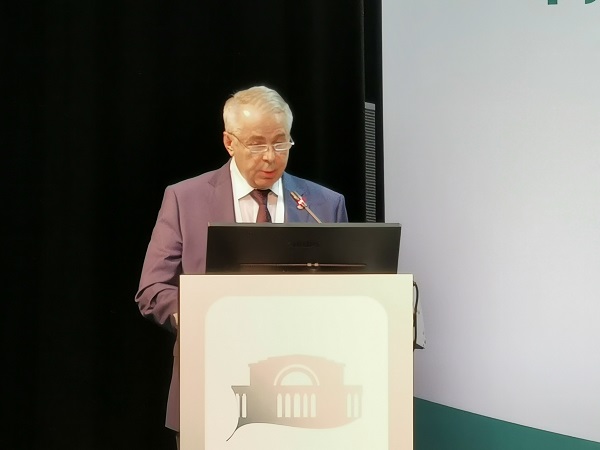 Yuri Mikhailovich spoke about the clinical rationale for the use of sulodexide in patients after EVLK. 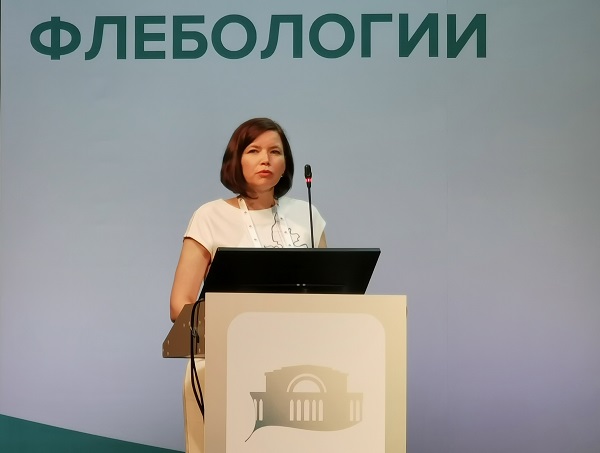 Report by the candidate of medical sciences Bukina O.V. (Tambov)

Olga Vasilievna announced the results of a prospective randomized comparative clinical trial. The study evaluated the effects of sclerobliteration using a 75% glucose solution, 0,05%, 0,1% and 0,15% sodium tetradecyl sulfate (fibrowein) solution. According to the results of the study, the following conclusions can be drawn: satisfaction with the clinical effect was greatest in patients who underwent sclerobliteration using a 75% glucose solution and a minimum concentration (0,05%) of a fibrowein solution.

Gennady Vladimirovich Krasavin, vascular surgeon, phlebologist, (Yaroslavl), finished the 2nd day of the conference with the message: "Experience in the use of endovascular embolization of the inflows of the internal iliac veins in the correction of pelvio-perineal reflux." 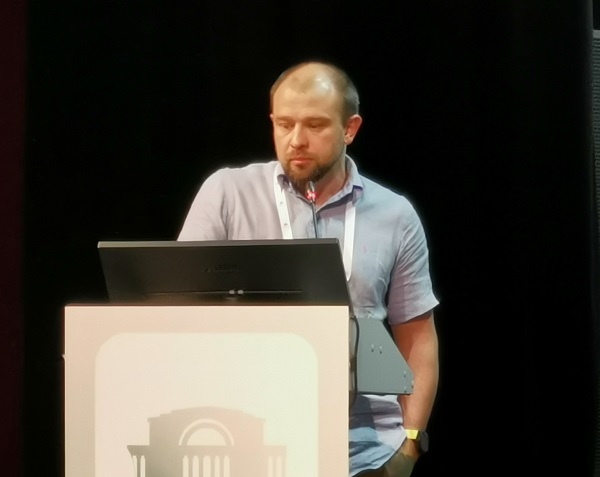 As always, it was pleasant to talk with fellow phlebologists from other clinics, cities and countries. 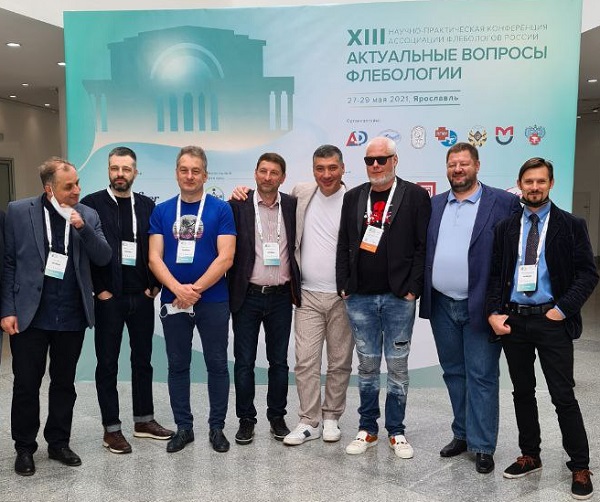 Fedorov D.A. and Raskin V.V. with Russian phlebologists at the AFR congress in Yaroslavl