Conference of surgeons of the Moscow region: "Modern technologies and innovations in surgery", 04.06.2021.

On June 04, 2021, in the village of Leninskie Gorki, Moscow Region, a conference of surgeons from the Moscow Region was held: "Modern technologies and innovations in surgery." The head of the "Medical Innovative Phlebological Center", surgeon-phlebologist, Ph.D. Semenov Artem Yurievich. 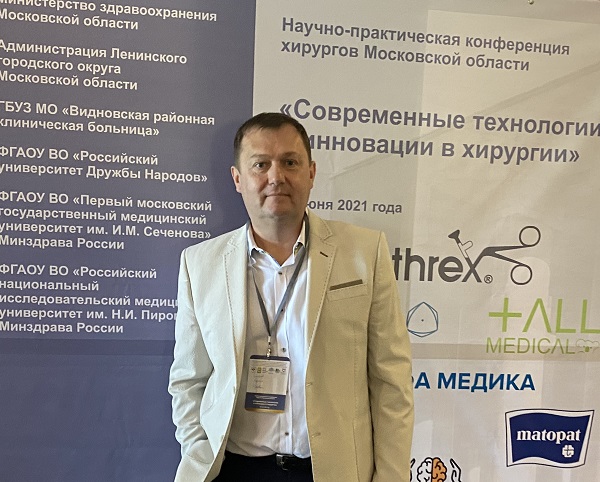 Semenov A.Yu. at the conference "Modern technologies and innovations in surgery" 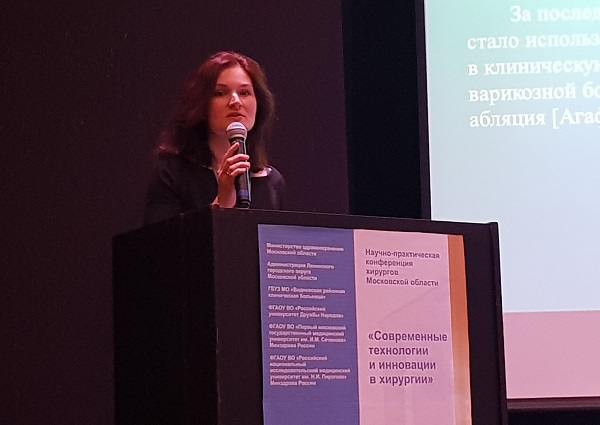 Dr. Kulakova presented a study that compared different methods of treating varicose veins. Anna Leonidovna demonstrated the advantages of modern radiofrequency ablation over traditional phlebectomy and stem sclerotherapy. In the context of the application of radiofrequency ablation, the disadvantages of the standard RFA technology recommended by the manufacturer were pointed out. The most relevant and practical use today is a modified RFA technique, with an increase in cycles. 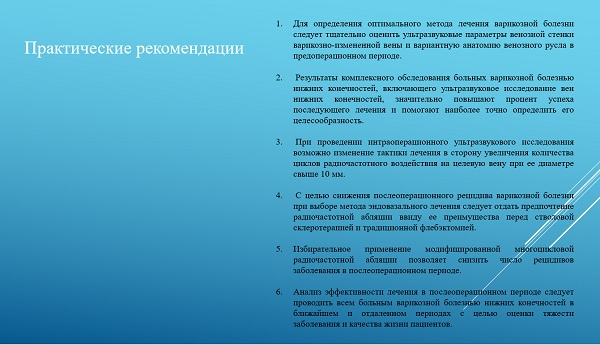 Practical recommendations from the report of Kulakova A.L.

The disadvantages of a standardized RF ablation model are known to many of those skilled in the art. Nevertheless, even today the method of radiofrequency ablation retains its positions in the world of modern European phlebology. 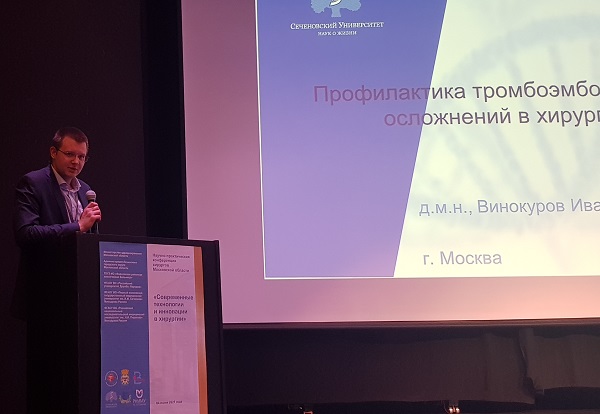 Ivan Andreevich told about the intricacies of anticoagulant therapy in modern surgical practice. Quite substantively, Dr. Vinokurov expressed his opinion on the use of antiplatelet drugs for the purpose of anticoagulation. This is an important point in this lecture. Despite the good evidence base and the opinions of leading experts, old mistakes remain on the ground. Doctors, especially public hospitals, persistently prescribe antiplatelet agents to prevent thrombosis. This practice often leads to the development of complications in patients. In order to prevent thromboembolic complications, the following drugs are effective:

The drugs of the latter group are of the greatest interest in modern practice. The clinical base of their application and the evidence base for their effectiveness are growing. 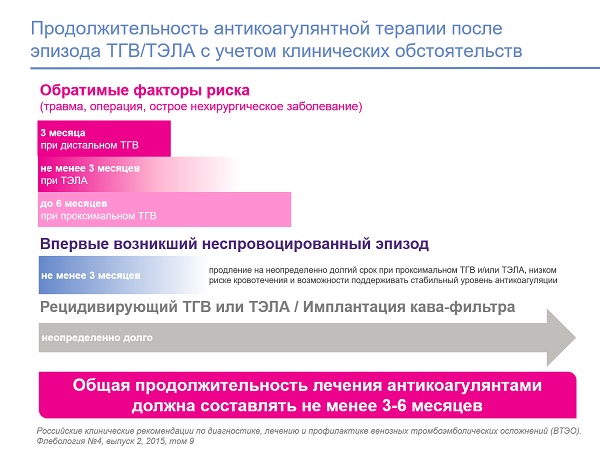 Compression products are an integral part of thrombosis prevention today. The use of compression significantly reduces thromboembolic complications and has practically no contraindications. Another factor preventing thrombus formation is the early activation of the patient. That is why minimally invasive surgery for varicose veins is so effective and safe. 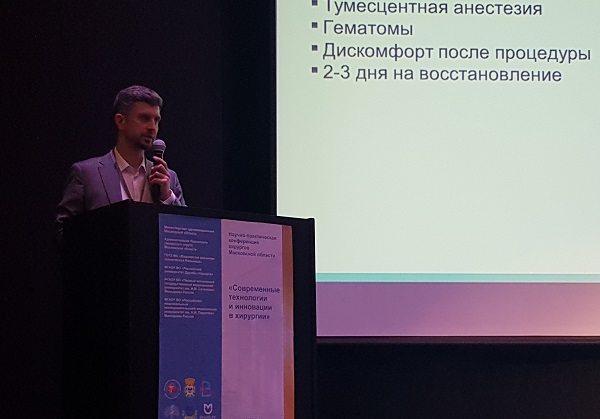 Why, after all, phlebologists are in no hurry to introduce glue obliteration? It seemed that the main "BUT" was the price of a set for manipulation. A certain category of doctors and patients will not agree with this. They want the best, whatever the price. Limitations on vein diameter, tortuosity, etc., can also be overcome by developing skills and honing technique. 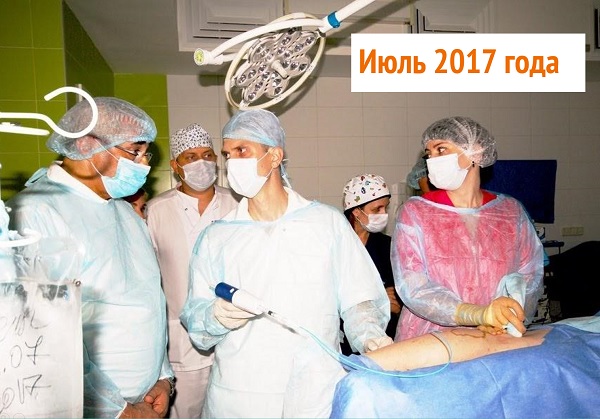 The main problem with medical glue is the glue itself, oddly enough. A foreign body deliberately left in the human body. This is precisely the main problem with adhesive technology. Years have passed since its inception, many thousands of patients have been operated on. However, we have not heard a clear answer to the questions of the biodegradation of the adhesive substance. There is little need to prove that cyanoacrylate is not biologically inert. The pioneers of glutinous obliteration in eastern Europe voiced this with a good visual range of rare but very unpleasant complications. Is it acceptable to keep glucocorticoids on hand to address potential problems in routine varicose veins treatment? Probably, the future belongs to non-thermal non-tumescent techniques, a new glue formula, where it can be called "bio-glue", without reservations or doubts. 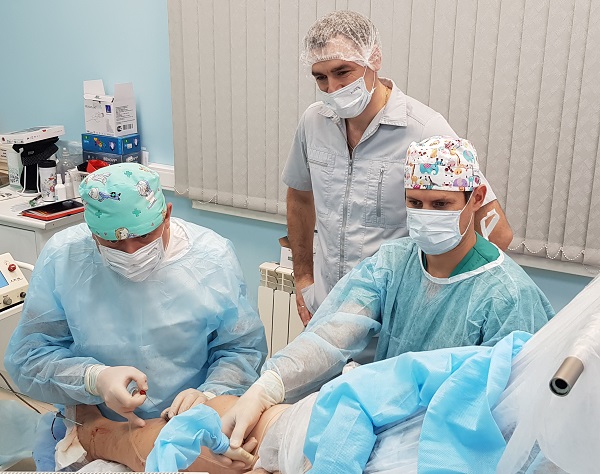 It is no secret that Artem Yuryevich is a devoted supporter and even a popularizer of laser obliteration in our country. The maximum use of the laser in the treatment of varicose veins, refusal, as far as possible, from other technologies - this is the approach of Dr. Semenov to varicose veins. In his lecture, Artem Yuryevich spoke about the modern possibilities of laser venous obliteration. The evolution of laser generators, light guides, delivery methods, and ... What was it for? After all, a micron laser with an end-face fiber coagulated the vein. 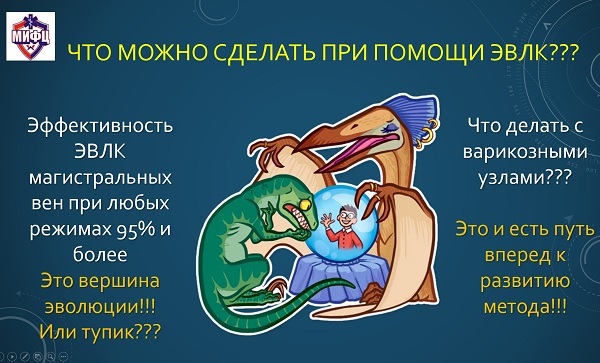 What can be done with EVLK?

Over the years, despite evolutionary changes, laser obliteration technology has remained relatively unchanged. Efficiency, convenience increased, the range of EVLK application expanded, the technique improved, but the principles remained the same. The first test of a laser generator with two-micron radiation proved its efficiency, but not a fundamental difference from previous generations. The wave of skepticism from phlebologists is understandable. Why change something that works almost perfectly? Why do you need a new expensive laser generator? It was to these questions that Dr. Semyonov answered. The physical principles of the new laser provide fundamentally new possibilities. The main feature of the 1940 nm wavelength is safety due to a decrease in the radiation penetration depth. What can we do today? Routine, quiet coagulation of varicose veins along the entire length, is it possible with a laser at 1470 and 1560 nm? Artem Yurievich went further. Why not give up miniflebectomy and sclerobliteration of varicose veins? It turns out that it is possible. There are situations (trophic disorders, tissue inflammation) when miniflebectomy is difficult or impossible in principle. But the two-micron laser copes with this task perfectly, this was clearly demonstrated by Dr. Semenov on the example of many dozen patients. 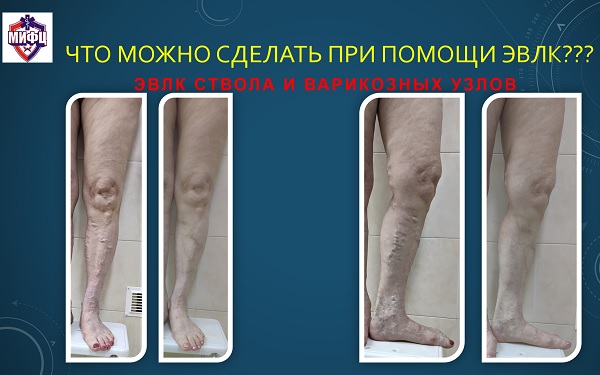 Laser obliteration of varicose veins is possible, quite convenient and effective. In many cases, the choice in favor of miniflebectomy or EVLK of varicose veins may not be obvious. In some situations, only the laser will provide the required therapeutic effect. Perhaps, even more impressive results of the use of laser coagulation await us in the future, but today, it is she who is the "gold standard" in the treatment of varicose veins. 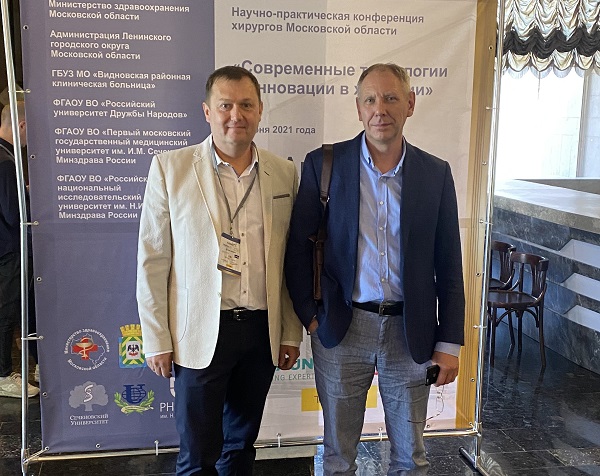 Semenov A.Yu. and Dotsenko N.M. at the conference "Modern technologies and innovations in surgery" in the Moscow region