"Is it possible to dissolve a thrombus with tablets?", Online colloquium with interactive discussion, 08.06.2020.

On June 8, a symposium was held online on the topic: "Is it possible to dissolve a blood clot with tablets?" 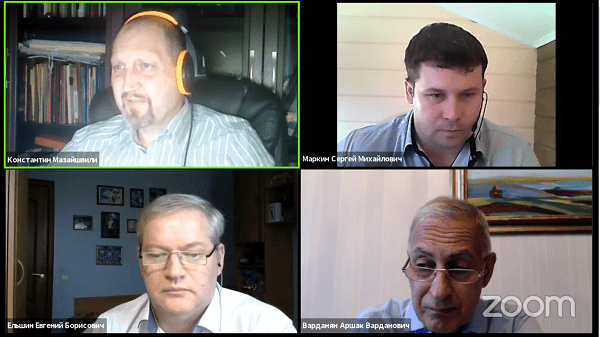 Participants of the conference "Can a blood clot be dissolved with tablets?"

Arshak Vardanovich Vardanyan, surgeon, phlebologist, professor of the Department of Surgery of the Russian Medical Academy of Science and Technology, made an online message: "Paget-Schrötter Syndrome: a modern look at an old problem." 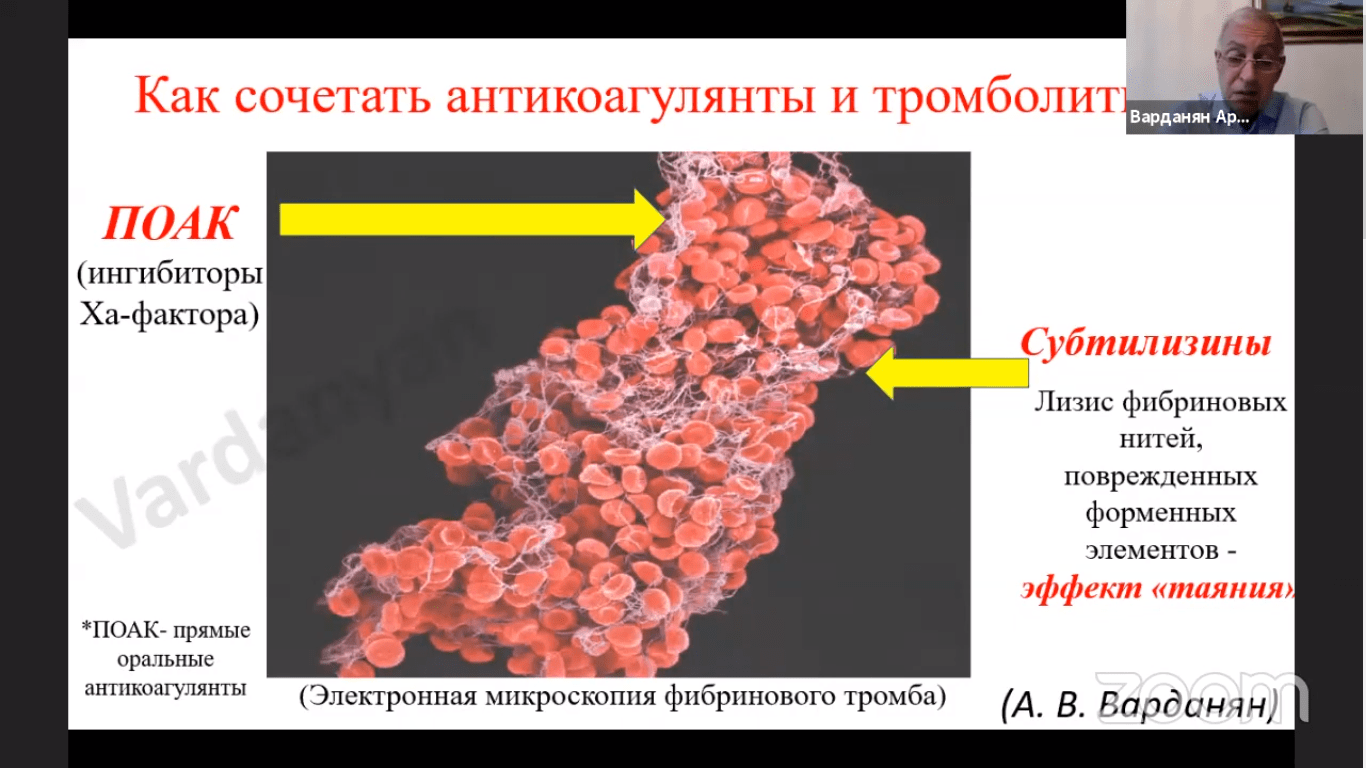 "Paget-Schrötter Syndrome: A Modern View of an Old Problem" - report by Professor A. Vardanyan

Arshak Vardanovich revealed aspects of the approach to a rather rare disease, Paget-Schrötter syndrome. The nuances of modern diagnosis and treatment of this disease were outlined. In the second part of the message, Dr. Vardanyan turned to the prospects for domestic and global tactics of treating thrombosis. In this context, Arshak Vardanovich presented the drug Trombovazim with the active ingredient subtilisin. An enzyme belonging to the class of serine proteases is produced by B. subtilis (hay bacillus). This drug is claimed as a promising method for the treatment of deep vein thrombosis. In the context of the post, reference was made to the 2018 Nobel Prize winners in chemistry: Francis H. Arnold, George P. Smith and Gregory P. Winter. These researchers from the United States received an award from the Royal Swedish Academy of Sciences for their work on "Guided Evolution of Enzymes" and "Phage Display of Peptides and Antibodies". These achievements of American scientists undoubtedly open a new milestone in modern bioengineering and pharmacology. But how subtilisin, in the composition of the drug Trombovazim, relates to these studies, is not entirely clear from the message. I would venture to suggest that the technology of directed evolution of enzymes is involved in obtaining the molecule of the active substance. Another innovative method that was used in the creation of the drug Trombovazim is AXIS technology. This technology is based on the idea of ​​forming bonds of proteases with a neutral polyethylene oxide molecule. This is done using a directed stream of accelerated electrons. In this way, the immobilization of active molecules is achieved for delivery through the gastrointestinal tract to the bloodstream. As a result, the bioavailability of the drug (subtilisin) is about 16-18%, according to the official instructions.

In terms of practical application, Dr. Vardanyan presented data on the use of the drug Trombovazim by Russian specialists. In addition to deep vein thrombosis, unexpectedly, the drug has shown good results in combating the symptoms of chronic venous insufficiency, including trophic ulcers. That is, the active substance, declared as a thrombolytic, is effective in CVI? You can return to this point later.

The following message was presented by Evgeny Borisovich Elshin, surgeon, (Samara) on the topic: "Ways of recanalization of acute deep vein thrombosis of the lower extremities." 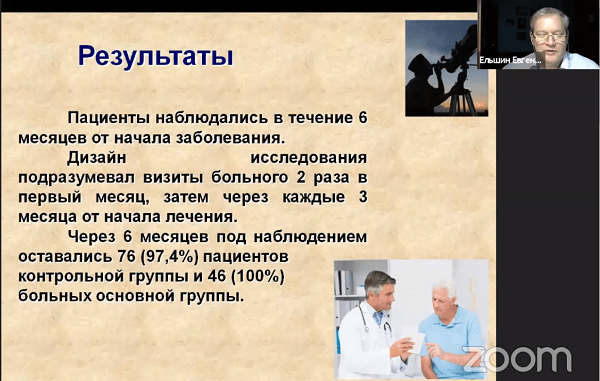 "Ways of recanalization of acute deep vein thrombosis of the lower extremities" - report by E.B. Elshina.

Evgeny Borisovich presented the results of his own clinical study of the treatment of acute venous thrombosis in 122 patients (for a follow-up period of 6 months). In 76 of them, standard therapy for venous thrombosis with Rivaroxaban was used, 46 patients, in addition to standard therapy, received Trombovazim at a dose of 800 units 2 times a day for 3 weeks. In the main group, reliably the best indicators of recanalization of thrombosed veins were obtained. There were still questions about the methodology for determining "weak", "average" and "good" recanalization, but in general, the results of Dr. Yelshin's research were understandable.

In general, not without a large, very large, share of skepticism, personally I was interested in the drug Trombovazim.

What is the bottom line? If Thrombovazim is indeed an effective oral drug for thrombolysis, then this is an unconditional breakthrough in the pharmaceutical industry. But what is there, a breakthrough in the domestic, Russian pharmaceutical industry. It sounds funny in modern reality, but still. After all, it is much easier to advertise and prove the obvious, or the non-obvious, which is much worse. And at this very time, far, overseas, someone is making history today. The modern Russian pharmaceutical industry ... Somehow involuntarily the face begins to blur into a sad smile, an associative row of generics, "import substitution" and, oddly enough, "Comedy Club" appear in the mind. Maybe it's still worth copying not only ideas and technologies, but the means and methods of generating these same technologies, and ideas would not hurt ...

The idea of ​​oral thrombolysis is undeniably brilliant. But the evidence base, based essentially on individual clinical observations, does not hold up to scrutiny.

And most importantly, why does the manufacturer of a drug, investing large sums of money in product advertising, not care about conducting good clinical trials? And the production of a line of biological additives does not add credibility to either the drug or the center of pharmacology.

It is in view of the modest evidence base that the indications for the use of this drug (Trombovazim) in the official instructions are formulated as follows: it can be used as an adjuvant in the complex therapy of chronic venous insufficiency. Probably, hence the therapy with Thrombovazim CVI, trophic ulcers. The curtain.

It is certainly necessary to discuss the drug, but it is obviously too early to take it into service. Let's wait for a good quality randomized trial, if any.