Our article in the journal "Outpatient Surgery": "Actual issues of aesthetic sclerotherapy of veins in the arms"

In the 1st issue of the journal "Outpatient Surgery" (editor-in-chief prof. Bogachev V.Yu.) for 2021, our article was published: "Topical issues of aesthetic sclerotherapy of veins in the arms." 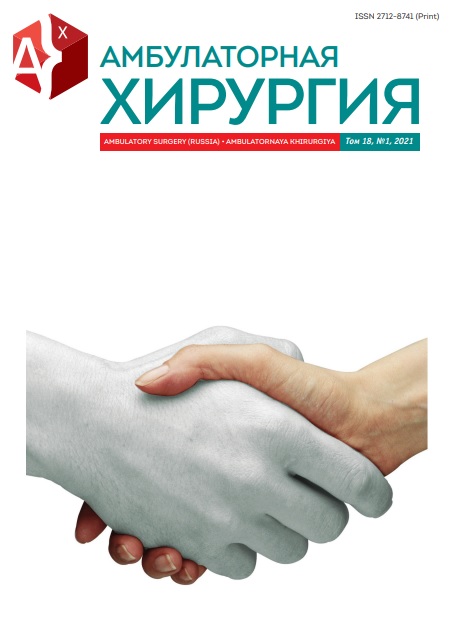 The authors of the article are a team of phlebologists of the Medical Innovative Phlebological Center "MIFC" (Moscow) - Artem Yuryevich Semenov, head of the MIFC and Vladimir Vyacheslavovich Raskin, a leading employee of the MIFC.

Authors of the article "Topical issues of aesthetic sclerotherapy of veins in the arms": Semenov A.Yu. and Raskin V.V.

Topical issues of aesthetic sclerotherapy of veins in the arms

In recent years, an increasing number of patients have come to phlebology centers with a cosmetic problem of protruding dilated veins in the upper extremities. This especially affects people whose work is associated with a load on their hands. Since 2015, in the phlebology center "MIFC", a procedure of micro-foam sclerobliteration has been performed to eliminate veins in the arms. The indications for its implementation are the presence of dilated veins in the arms, which worsen the psycho-emotional background of the patient. The aim of this study was to develop the optimal tactics for sclerotherapy of unaesthetic veins in the arms.

In recent years, an increasing number of patients are asked to solve a cosmetic problem of dilated hand veins. This problem especially affects of older people or people whose work is associated with a strain on the hands. The foam-form sclerotherapy procedure has been performed at the our medical innovation phlebology center since 2015 to eliminate unesthetic veins in the hands. Indications for its implementation are the presence of dilated veins in the hands that worsen the patient's psycho-emotional background. The aim of this study was to develop the optimal tactics for sclerotherapy of unaesthetic veins in the arms.

Rice. 1. Puncture of a vein in the arm 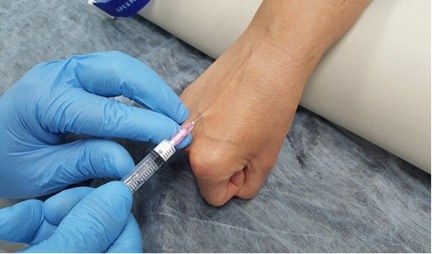 Fig. 2. Injection of a foamy form of sclerosant without intercepting the syringe (with one hand)

From September 2015 to February 2020, sclerotherapy was performed in 38 patients in the clinics of the Medical Innovative Phlebological Center. Of these, 36 women and 2 men (a total of 72 upper extremities were treated). Before carrying out sclerotherapy on the hands, all patients signed an informed consent, photographs of the target zone of exposure were taken, and the veins on which the exposure was carried out for each procedure were agreed. The assessment of the dilated venous bed in the arms was carried out taking into account the wishes of the patient and the peculiarities of the anatomy. For the procedure, a micro-foam form of Lauromacrogol 400 (ethoxysclerol) was used at a concentration of 1,5% to 2,5%. For a clearer visualization of the venous bed, the upper limb was clamped with a tourniquet (as in classical intravenous injection). The introduction of the sclerosant was carried out slowly, bolus. When the foam is injected, the visualization of foam propagation is usually clear enough to stop injection when foam spreads into the non-target pool. After the introduction of the drug, the tourniquet was removed, a pressure bandage was applied and elastic bandaging of the limb was carried out with a bandage of medium extensibility for 20-30 minutes. At this time, the patient performed clenching / unclenching of the hand into a fist (imitating walking as after sclerotherapy on the lower extremities). Then the elastic bandage was changed to compression hosiery (sleeve or glove). We recommend wearing compression hosiery in the daytime for 2-3 weeks after the procedure.

Each patient underwent 1 to 3 sessions of hand sclerotherapy with an interval of 3 to 7 days, the number of injections ranged from one to five per session.

Rice. 3. Results of sclerotherapy on hands after 2 months

Rice. 4. Results of foam sclerotherapy on hands after 2 months 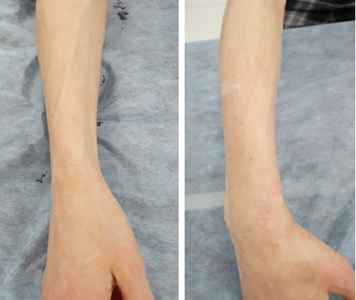 Rice. 5. Results of sclerotherapy on the forearm after 2 months

All patients were followed up within a month to 1 year (Fig. 3,4,5). Target vein occlusion occurred in 100% of cases. In 7 patients, moderate hyperpigmentation in the projection of the obliterated veins was noted, which resolved on its own within 3 to 6 months. In 2 cases, occlusion of a non-target vein on the forearm occurred with a favorable outcome (complete involution of the vein). In 1 case, phlebitis of the target vein developed, which was docked within seven days with local NSAIDs. In another 1 patient, treatment was complicated by metting, which was eliminated by one session of microsclerotherapy. No other complications, side effects or allergic reactions were noted.

Upper limb aesthetic sclerotherapy is a safe and effective cosmetic procedure. The indications for its implementation are the presence of dilated veins in the arms, which worsen the psychoemotional background of the patient. If the technology is followed, you can count on a minimum percentage of complications. After the procedure, the patient has no scars, scars, stitches. There are no serious restrictions for the procedure, there is no rehabilitation period. Sclerotherapy provides high cosmetic quality with minimal trauma. As a result of sclerotherapy, selective occlusion of the target venous segment is observed, there is the possibility of preserving the cubital veins.