On June 23, 2020, another event was held online from the Antireflux Deep Learning Workshop on the topic: Trophic ulcers: from promising therapy to promising surgery.

Sergey Mikhailovich Markin, phlebologist, candidate of medical sciences, (St. Petersburg), prefaced the presentations of the other speakers with the message: "The urgency of the problem of treating trophic ulcers." Sergey Mikhailovich shared the results of a survey among leading phlebologists on approaches to the diagnosis and treatment of trophic venous ulcers. This survey showed that only about a tenth of the phlebological audience are engaged in the treatment of trophic venous ulcers at a high professional level. 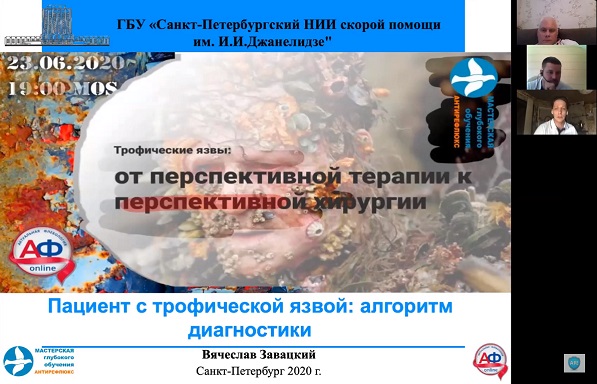 Vyacheslav Vladimirovich presented a good analysis of the recommendations of the world's leading phlebological communities for venous trophic defects. Based on these data, as well as his own practical experience, Dr. Zavatsky formulated modern principles for the diagnosis and treatment of venous trophic ulcers.

Leading clinical criteria in the diagnosis of ulcerative defects of the lower extremities:

Dr. Zavatsky described in sufficient detail the approach to each of the listed diagnostic criteria. Vyacheslav Vladimirovich noted the presence of a special dressing room with modern equipment for ultrasound diagnostics as an important condition for a good diagnosis of venous trophic ulcers. Dr. Zavatsky's message was very informative, but most importantly, not only a diagnostic algorithm was formulated, but also a competent interdisciplinary position on the tactics of treating trophic ulcers. The criteria for the need for local surgical treatment or conservative therapy of venous trophic wounds are clearly defined. 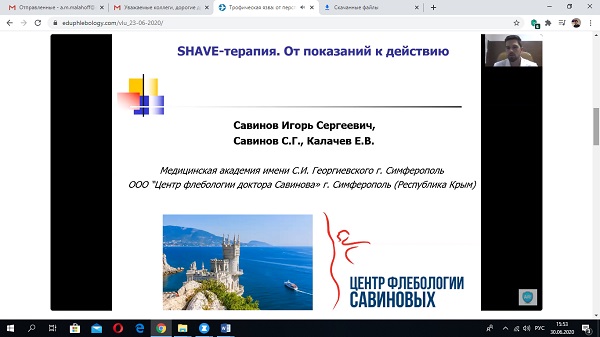 Igor Sergeevich shared his own experience in the treatment of trophic venous ulcers. The doctor spoke about the logistics of the approach to the treatment of chronic wounds, presented the good results of the treatment. Particularly noteworthy is the fact that the entire range of treatment measures was implemented on an outpatient basis and in a one-day hospital. It is the need for inpatient treatment of patients with trophic ulcers that prevents a significant number of domestic specialists from fully dealing with this medical problem. It is no secret that most of the domestic phlebologists work in private medicine. The presence of a full-fledged round-the-clock hospital for a phlebological center is more the exception than the rule. Dr. Savinov's approach to the full treatment of trophic ulcers deserves attention and is likely to be adopted by a number of Russian specialists. 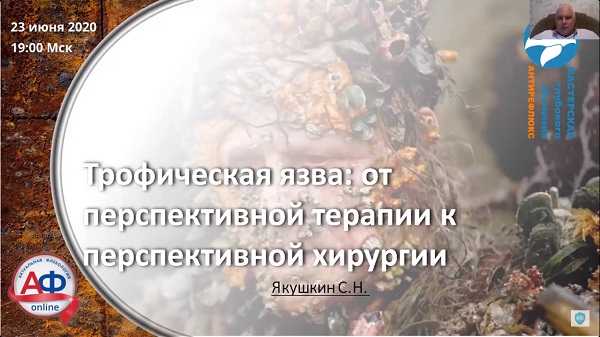 In his report, Sergey Nikolaevich turned to the applied aspects of SHAVE therapy. In great detail, as in a good practical guide, Dr. Yakushkin told about the nuances of the modern surgical procedure. At some point, there was even a feeling that you were not listening to the report, but that you were at a master class in the operating room. The comprehensive information provided in the message will inspire more than one phlebologist surgeon to expand their clinical arsenal.

Nina Dzhansugovna Mzhavanadze, vascular surgeon, candidate of medical sciences from Ryazan, presented the message: "The potential of regenerative medicine in the treatment of trophic ulcers." 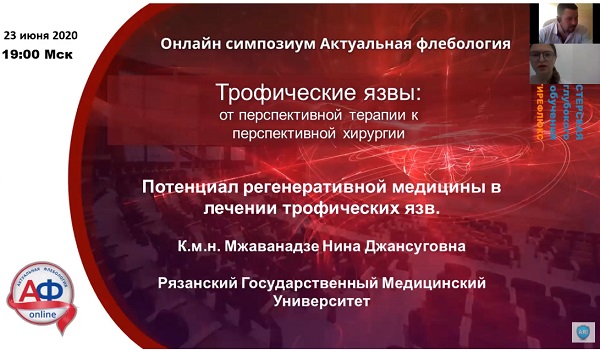 "The potential of regenerative medicine in the treatment of trophic ulcers" - reports ND Mzhavanadze. (Ryazan)

Nina Dzhansugovna shared modern data on promising developments in bioengineering. In the context of the treatment of trophic venous ulcers, the following are the most interesting:

Bioengineering technologies are currently developing very rapidly. It is likely that it is developments in this direction that will change the concept of medicine, as such, in the coming decades. 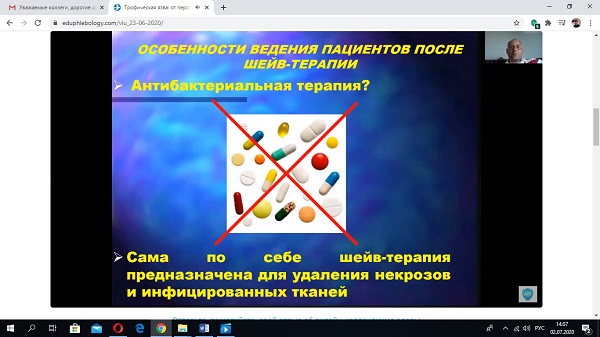 Sergei Nikolaevich shared his approach to modern surgical treatment of trophic venous ulcers. Dr. Derkachev told about SHAVE-therapy in a rather detailed presentation. Was presented as a variant of the operation from the Swiss specialist Joachim Hermans, and his own version of the operation on trophic wounds. Despite the far from the best communication quality, this message was very informative and useful for many specialists in the field of phlebology. It is from the understanding of applied nuances that the success of any, especially complex, surgical treatment is formed.

You can watch the full version of the webinar "Trophic ulcers: from promising therapy to promising surgery" by clicking on the link: https://eduphlebology.com/vlu_23-06-2020/