On April 30, 2021 in Barnaul and on May 14, 2021 in Pyatigorsk, scientific and practical conferences "A patient with venous pathology at a surgical appointment: from varicose veins to post-thrombotic syndrome" were held. 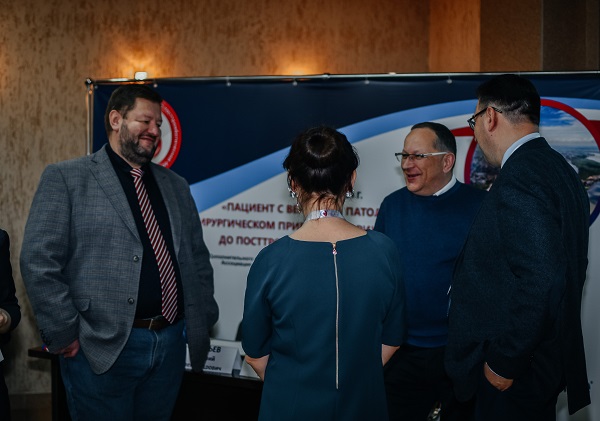 Dmitry Fedorov with participants of the conference in Barnaul 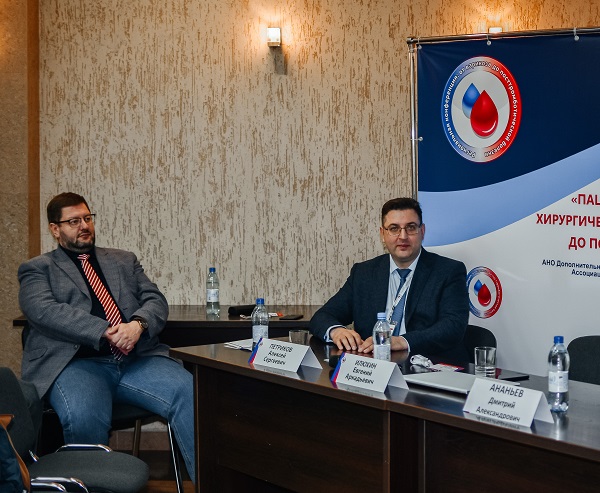 Speakers D.A. Fedorov and Petrikov A.S. preparing for the performance 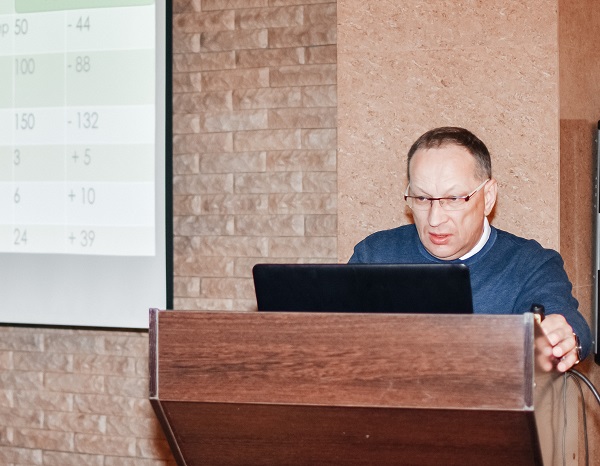 This rather voluminous and diverse lecture shed light on a number of changes in the world of modern phlebology. The first topic, which Yevgeny Arkadievich highlighted, was changes in the international classification of CEAP. The classification as a clinical subclass includes the phlebectatic crown and the designation for relapses of varicose veins and trophic ulcers. These innovations do not raise any special questions, and can somewhat improve the informative component of the international classification. The next innovation, namely the replacement of the numerical designations of the venous segments with their English-language abbreviations, is really difficult to speak in a positive tone. The conciseness, comprehensibility, accessibility and convenience of CEAP have always been its obvious advantages. But, as recognized by a number of authoritative studies, isolation and wearing a mask does not have a positive effect on brain oxygenation. Probably, members of the American Venous Forum expert group, which developed this innovation, were no exception. Also, Evgeny Arkadievich told about the trends in the endovascular treatment of varicose veins. 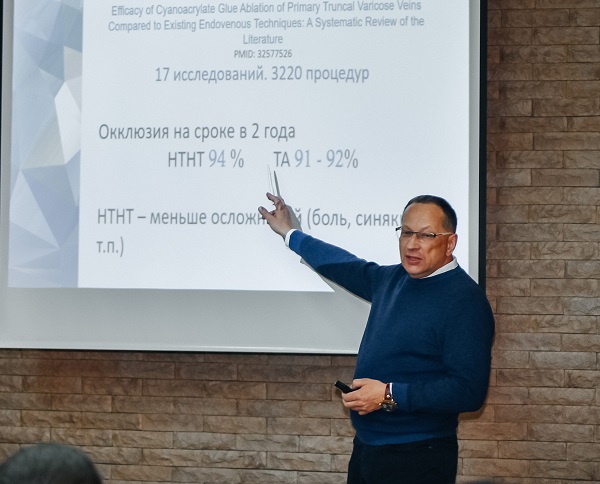 Radiofrequency and laser venous obliteration remain the standard of treatment for varicose veins, which seems to suit everyone, but ... Today we already have a number of non-thermal non-tumescent techniques that have a number of advantages over the already familiar thermal obliteration. However, upon closer examination, there are a number of questions to mechanochemistry and glue, the answers to which have not yet been given. Dr. Ilyukhin also referred to the new recommendations of the Association of Phlebologists of Russia regarding superficial vein thrombosis. The new document is quite detailed and clearly approaches the definition of the diagnosis and the tactical approach in the treatment of thrombophlebitis. 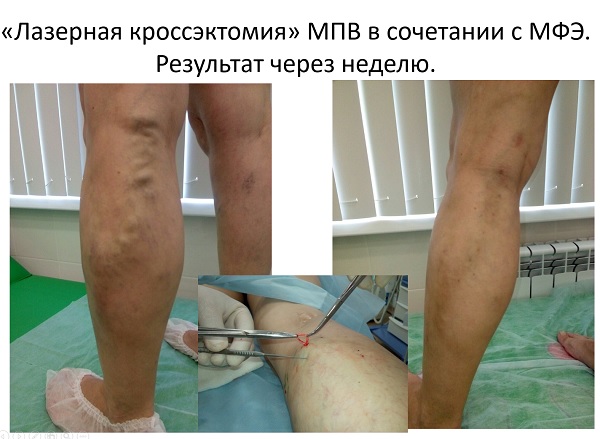 Khachatur Mikhailovich told about the possibilities of endovenous thermal obliteration in the development of acute ascending varicothrombophlebitis. Laser crossectomy for the development of thrombosis in the superficial vein system is used by a number of enthusiasts in domestic clinical practice. Doctors performing laser intervention in the acute period do not experience any special problems and questions. Except for one - the advisory and legal basis for this activity. Perhaps this is a good reason to nevertheless make changes to the recommendations for the treatment of acute ascending varicothrombophlebitis. 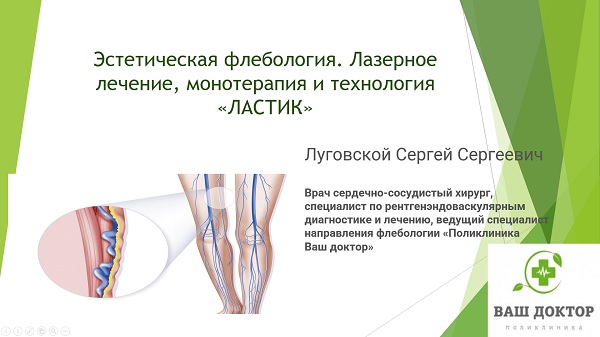 Report of a phlebologist from Belgorod Lugovsky S.S.

Sergei Sergeevich described his own experience of using the combined effects of sclerotherapy and a transcutaneous laser on the reticular veins and telangiectasias. 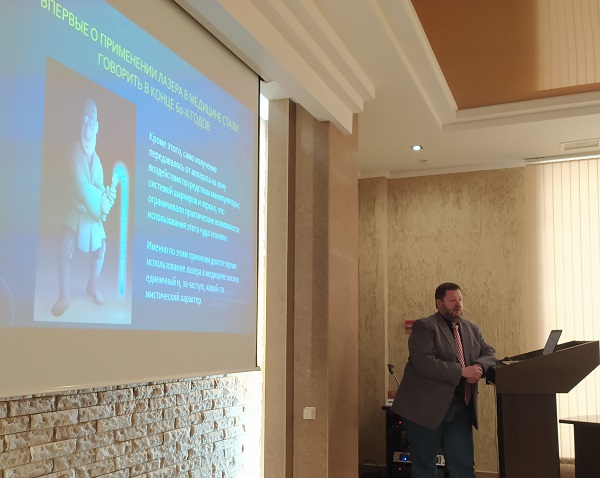 Report of the leading phlebologist "MIFC" from Moscow D.A. Fedorov

Dmitry Anatolyevich gave a short excursion into the history of the laser in medicine. More than two decades have passed since the advent of the first endovenous laser. During this period, the wavelength of laser radiation was changed, and the means of delivery of laser radiation were optimized. When, a few years ago, we (phlebologists) used laser generators with a wavelength of 1470-1560 nm and radial light guides, it seemed that this was the limit and there was simply nowhere to develop the technology further. Everyone was satisfied. The results of the treatment were excellent, satisfying doctors and patients. In 2017, the first mentions of the use of a laser generator with a wavelength of 1940 nm appeared. Leading phlebologists from the United States have conducted a number of clinical studies in South America. Those few data provided to the general public spoke about the possibility of using the new laser in the treatment of varicose veins. The potential for energy reduction (LEED) to achieve varicose vein obliteration has also been reported. New capabilities of the 1940 nm laser generator were revealed somewhat later. It was about these changes in EVLO that Dr. Fedorov told. 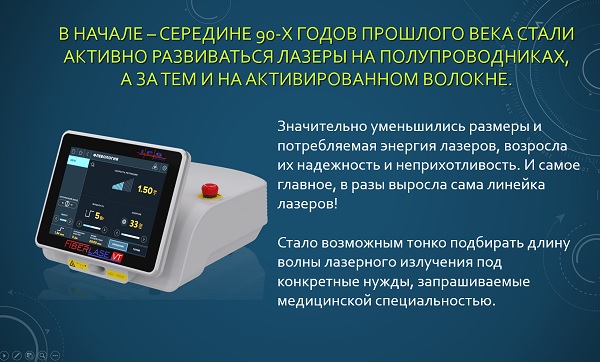 Report of a phlebologist from Moscow Fedorov D.A.

What can be done with EWLK 1940 nm ??? Simultaneous execution of EVLK of varicose nodes (of the TotalEVLK type). Dmitry Anatolyevich performed the first operation of this type in December 2019. The clinical and aesthetic effects were very impressive, but the procedure time was increased. With the development and modernization of the technique, the time spent on the total EVLK procedure became comparable and even less than with the standard combination of EVLO and miniflebectomy. Today we can safely say that EVLK of varicose tributaries and nodes can completely replace the procedure of miniflebectomy and (or) sclerobliteration. What are the advantages of EVLK varicose tributaries and nodes:

For clarity, Dmitry Anatolyevich presented a number of pictures "before and after" laser interventions on the lower extremities. The clinical and aesthetic results of total endovenous laser obliteration were not inferior to the results of miniflebectomy and sclerobliteration in similar cases. 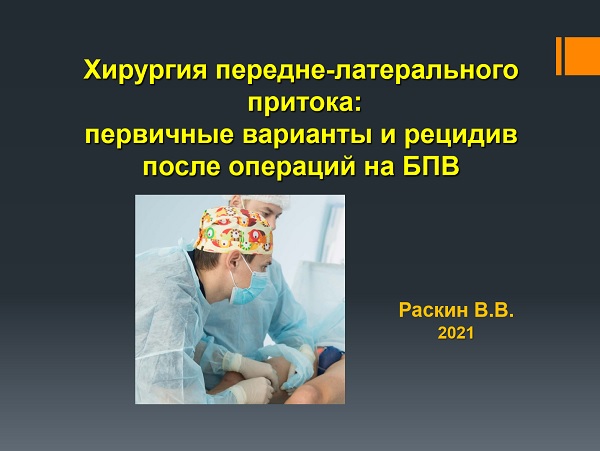 Report of a phlebologist from Moscow V.V. Raskin

The problem of anterolateral inflows is widely known to practicing phlebologists. In case of primary insolvency of the inflow, active tactics should be used, the elimination of the sub- and suprafascial part. It should be borne in mind that we may face the following technical difficulties:

Possible solutions to these issues:

The approach to recurrent anterolateral inflows after GSV surgery can also be a source of heated controversy. So much so that whole concepts of initially aggressive and expectant tactics have been formed. So, what are the reasons for the recurrence of varicose veins in the PLP system after operations on the great saphenous vein:

What can we do to avoid relapse in the PLP system after saphenous vein surgery: 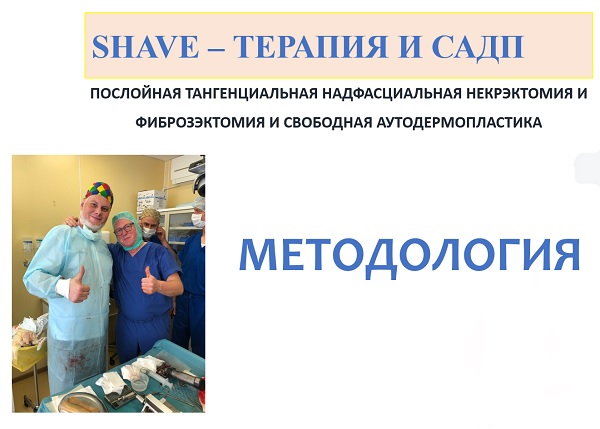 Report of a phlebologist from Moscow Yakushkin S.N.

Dr. Yakushkin gave a detailed algorithm for the treatment of venous trophic ulcers, depending on the stage and scale of the wound lesion. An integrated approach and a competent assessment of the situation help to solve even the most difficult clinical problems.

Speakers of conferences in Barnaul and Pyatigorsk