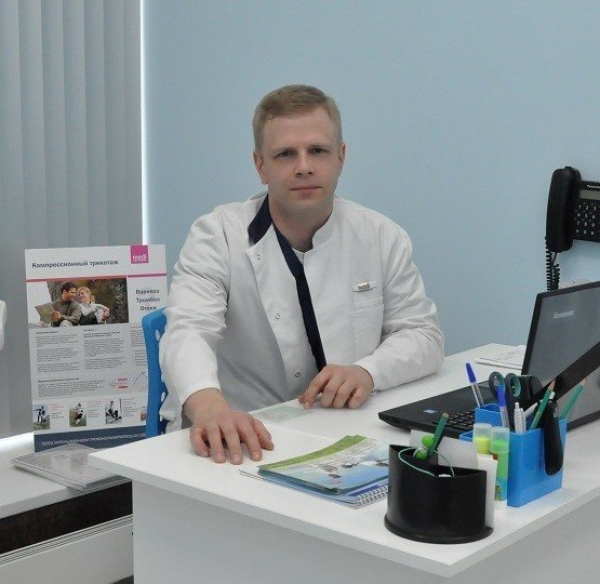 Senior Fellow at the Center for Vein "MIFTS 'surgeon, endovascular and aesthetic phlebology doctor-expert on ultrasound veins of the lower extremities, PhD.

Leading employee of the Center for Phlebology "MIFC", surgeon, endovascular and aesthetic phlebologist, expert doctor in ultrasound diagnostics of veins of the lower extremities, candidate of medical sciences. Member of the Association of Phlebologists of Russia, European Association for Vascular Surgery, Baltic Society of Phlebologists.

12.2010 - defense of the candidate's dissertation, awarded the scientific degree of candidate of medical sciences.

2002-2003 - the orderly of the operating unit No. 2 of the Russian Research Center for Surgery named after Acad. B.V. Petrovsky RAMS.

2003-2005 - nurse of the operating unit No. 2 of the Russian Research Center of Surgery named after Acad. B.V. Petrovsky RAMS.

2005-2008 - doctor of the ambulance and emergency aid station in Lyubertsy.

2010-2011 - a surgeon for providing emergency care at the City Clinical Hospital No. 20 of the Moscow Healthcare Department.

2010-present - Surgeon of the All-Russian Center for Disaster Medicine "Zashchita".

2014-present - leading specialist, surgeon-phlebologist of the Clinic of phlebology "MIFC"

Member of the Society of Herniologists

Member of the Society of Surgeons-Gastroenterologists

Member of Phlebology Association of Russia

2012 - Certification course under the "Surgery" program at the Russian Medical Academy of Postgraduate Education on the basis of the N. Sklifosovsky.

2013 - Advanced training course "Issues of diagnostics and surgical treatment of patients with cardiovascular diseases" at 1 Moscow State Medical University named after THEM. Sechenov.

Publications, scientific and professional achievements: Has 10 scientific works in the domestic and foreign press medical profile.