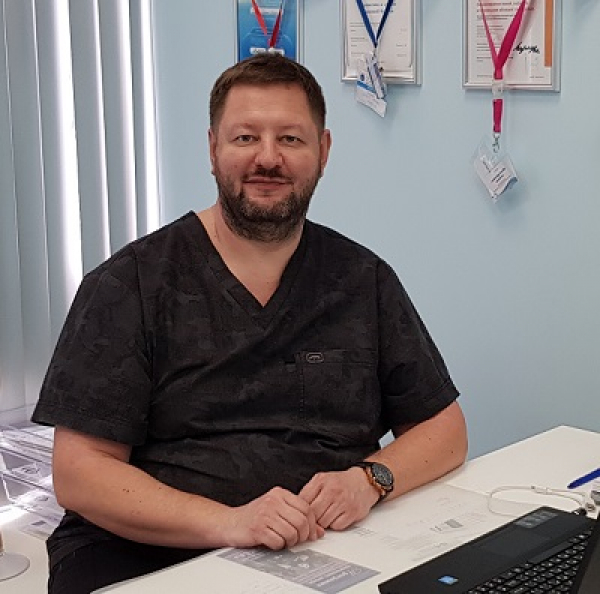 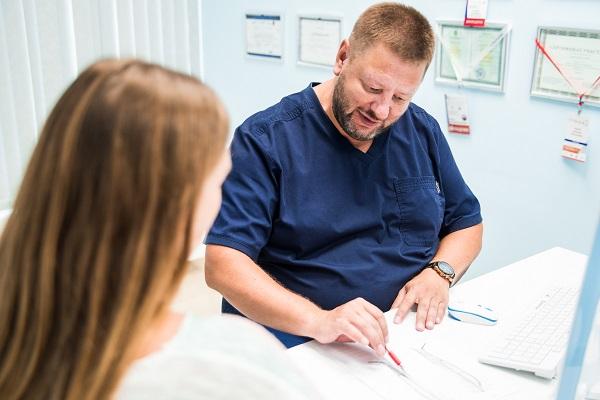 He is consulted by the leading phlebologist "MIFTS", a cardiovascular surgeon, an ultrasound doctor, MD Fedorov D.A.

Dmitry Anatolyevich Fedorov is the author of 50 scientific papers on various topics of general and vascular surgery. Among them are articles on the treatment of oncological diseases of the abdominal organs, various operations using laparoscopic techniques. Much attention is paid to such scientific and practical aspects of modern surgery as the treatment of hernias (herniology) and varicose veins of the lower extremities (phlebology). He took an active part in the creation and promotion of the "Professional Society of Herniological Surgeons of Russia". 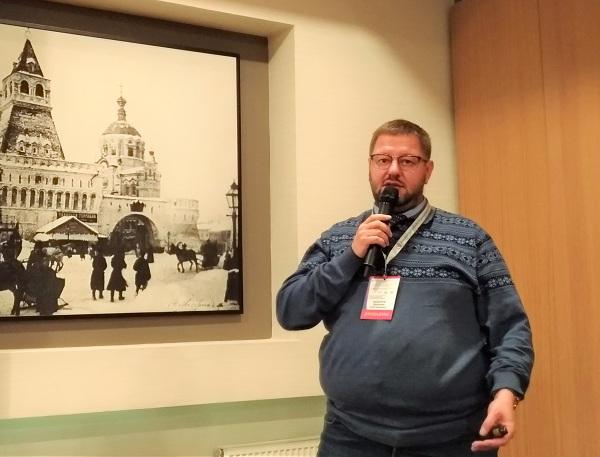 At the next conference, Ph.D. Fedorov D.A.

In 2009, Mr .. passed training on the development of laser techniques in surgery, including. and phlebology, after which he began to actively use the technique of EVLK (endovasal laser coagulation) in the daily treatment of patients with venous disease.

Repeatedly increased his scientific and practical level by passing courses of improvement of doctors on various, including phlebological subjects in 2006, 2011, 2014 - 2017gg:

2006 to 2012 D.A. Fedorov taught as an associate professor at the Department of FPPOV of the First Moscow State Medical University named after I.I. I.M.Sechenov. 2012 to 2017 read a series of lectures on phlebology at the Federal State Institution "State Scientific Center for Laser Medicine of the FMBA of Russia".

Fedorov D.A. patent on a method of treating varicose veins 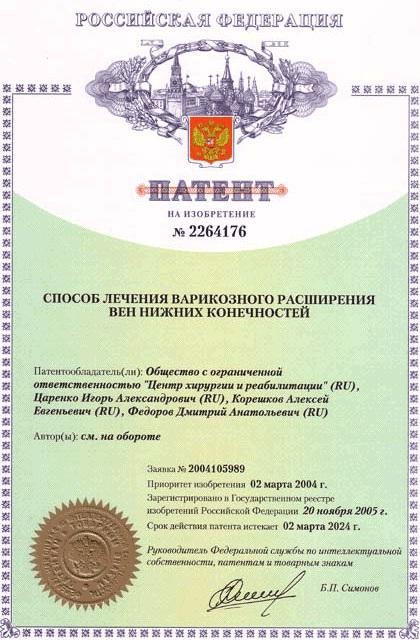 Patent for the invention of Dr. Fedorov D.A.

The methods of treatment used by Dr. Fedorov D.A. 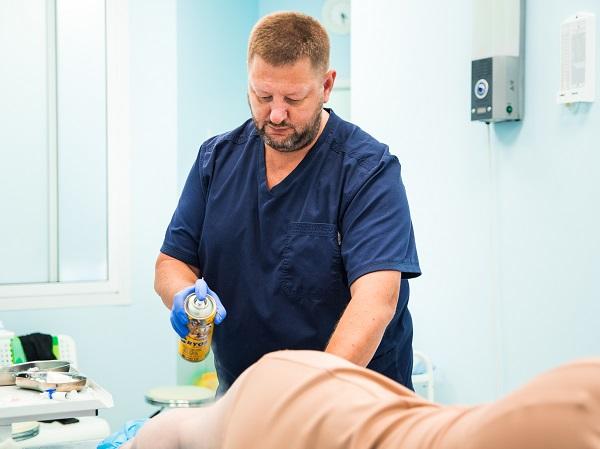 Dr. Fedorov D.A. holds a session of sclerotherapy of the lower extremities

Surgeon-phlebologist Fedorov D.A. in the clinic "MIFTS" performs all types of surgical interventions for varicose veins of the lower extremities, both outpatient and in the hospital on the same day: crossectomy, miniflebectomy, microflebectomy, combined phlebectomy.

Reviews of patients about the phlebologist Fedorov D.A. 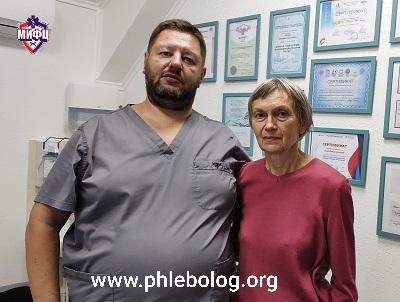 I first met him in June 2010. I was 57 at the time. I developed varicose veins in my legs from the age of 30, and by this age I was already actively looking for the help of a phlebologist. A friend helped me, she advised me to go to the Moscow clinic for phlebology, on Vasilisa Kozhina street. The first examination was carried out by Dmitry Anatolyevich, he said that he could offer an outpatient operation and soon performed complex surgical procedures requiring precision.

This was followed by careful follow-up and correction for 6 months, with strict adherence to the recommendations. The treatment was not difficult to tolerate. The difficulties were different: the summer of 2010 was very hot, in the cities there was smoke from forest fires, interruptions in the movement of electric trains, but all this was blocked by gratitude to the doctor for my "light" legs.

I have a chronic disease. Time passed, I felt the need to go to the doctor again and was about to call the Moscow clinic when I found out that a phlebologist is working at the MIFC clinic on Kolomenskaya, and this is Dmitry Anatolyevich Fedorov. What joy! THIS IS MY DOCTOR!

So in April 2017, for the second time I met with Dmitry Anatolyevich, with his big skillful hands. This time he performed an operation on both legs using a laser. The operation is very easy to transfer. Once you leave the operating room, you can continue your normal life. And these are not advertising words. This is the doctor's possession of modern, high-tech methods of treatment. I would especially like to note that Dmitry Anatolyevich generously shares his professional knowledge, doctors were present at both of my operations, to whom he passed on his experience.

Dear Dmitry Anatolyevich, I sincerely thank you for the health of my legs, for your high professionalism. Troubles Tatyana Nikolaevna, Obninsk. 04.10.2019 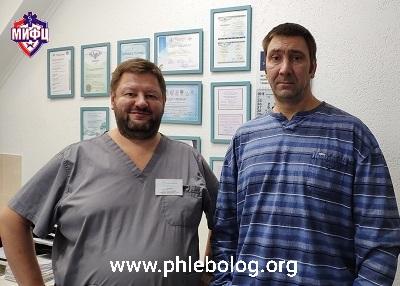 With thanks to Fedorov Dmitry Anatolyevich!

My name is Latynov Victor Leonidovich, 59 years. Varicose veins on both legs became noticeable from the 2005-2006 years. I could not immediately deal with this problem, there were many trips to work. Over time, I realized that pulling further is no longer worth it. At 2016, I wanted to go for an operation in an open way - a phlebectomy, but found out that in my case it would take a very long time to recover, and refused the operation.

In the fall, 2018, turning to the phlebology clinic, found out about the possibility of laser treatment. He consulted at a reception with a phlebologist - Dmitry Anatolyevich Fedorov.

2 February 2019 Dmitry Anatolievich performed an operation on endovasal laser coagulation on both legs. The condition of the veins, especially on the right leg, was difficult and the operation lasted longer than planned. I expected that it would be painful, but, fortunately, the expectations were not confirmed, thanks to the doctor! Honestly, I did not expect that right after the operation I would get home without any problems. I would like to note the professionalism of the doctor and nurses, very comfortable conditions for the operation. The medical equipment used is very impressive.

After the operation, sclerotherapy sessions were held until the beginning of May. After their completion, a control inspection was scheduled for the fall of 2019. From the end of spring to mid-autumn, the condition of the legs changed dramatically for the better: the veins disappeared, swelling passed. At the follow-up examination and ultrasound examination in late October, Dmitry Anatolyevich noted that there were no varicose veins and that a normal and full-fledged lifestyle could be maintained. The doctor also recalled the need for preventive measures and follow-up examinations 1 once every 1,5-3 of the year.

I thought that my case would require a longer treatment. I will readily recommend laser treatment with D.A. Fedorova. Many thanks to Dmitry Anatolyevich, nurses and medical staff who worked with me. Latynov V.L., Moscow, 31.10.2019 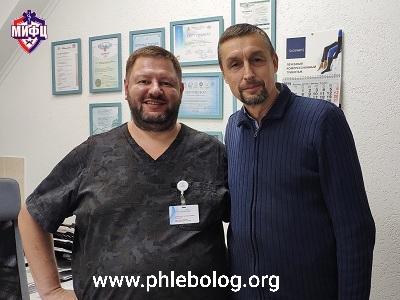 I was treated by D.A. Fedorov in the 2011 year at the age of the 54 year. Due to heredity and intense volleyball, he had significant varicose veins on his left leg. He was successfully operated by the EVLK method on his left leg, on a large saphenous vein and was observed 2 of the year.

Because I was not going to quit volleyball, and I am not going to, and the years go by (now I am 62) - I checked with Dmitry Anatolyevich in 2019 and received a recommendation for EVLK of the great saphenous vein on the right leg and varicose inflow on the left leg. The operations were successful and soon I start to recover (play).

We express our heartfelt gratitude from our family to the excellent competent doctor-phlebologist D.A. Fedorov and wish him creative success, writing and defending his doctoral dissertation and good health! The family of E.A. Pivnenko and Honest G.N., Moscow, 25.11.2019